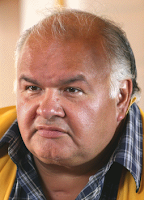 Gary Dale Farmer was born in Ohsweken, Ontario, Canada on June 12, 1953 into the Cayuga nation and Wolf Clan of the Haudenosaunee/Iroquois Confederacy. Farmer attended Syracuse University and Ryerson Polytechnic University, where he studied photography and film production.

His first major role was on the CBC's ‘Spirit Bay’ (1982-1987). He subsequently played police captain Joe Stonetree on the syndicated TV series ‘Forever Knight’ (1992-1996), and Chief Tom in the CBC first nations TV series ‘The Rez’ (1996-1998). Farmer is best known for his role as spiritual Native American guide Nobody in “Dead Man”(1994). Gary reprised the role for a cameo in “Ghost Dog: The Way of the Samurai” (1999), also directed by Jim Jarmusch. He also was the publisher of Aboriginal Voices magazine, and one of the Founders of the Aboriginal Voices radio network. He is an avid supporter of native media projects in film, radio, television and the internet. He has won numerous awards and nominations from many native film festivals, and Canadian film awards.

He also has a blues band called ‘Gary Farmer and the Troublemakers’. The band has released two CDs, Love Songs and Other Issues in 2007 and Lovesick Blues in 2009.

He recorded the audiobook version of Louise Erdrich's 2012 novel The Round House, winner of the 2012 National Book Award for Fiction.