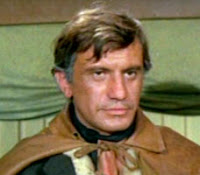 Dragomir Bojanic was born on June 13, 1933 in Kragujevic, Serbia. He was best known by his nickname Anthony Ghidra and was a famous Serbian actor. He studied at the Academy of Theatre, Film, Radio and Television in Belgrade from 1964 to 1966. He was a member of the Yugoslav Drama Theatre in Belgrade. Acting career began at the National Theatre in Belgrade, as a first year student Theatre Academy. He was the youngest in the history of Yugoslav Mitke Theater.

His film career began in a supporting role in the film by Zika Mitrovic "Echelon Doctor M." (1955).He had lead and supporting roles in more than thirty films. Under the pseudonym Anthony Ghidra he appeared in a dozen Italian films mostly westerns and action films. At the Pula Film Festival in 1974. he won the Golden Arena for the role of partisan Tadije Čemerkića Radomir Šaranovića in the movie "Wedding" (1973) created from the novel by Michael Lalic. Ghidra appeared in over 110 films and TV appearances.

He’s best known for his roles as Kondor, German secret agent in popular 1972 film “Valter brani Sarajevo”. He is, however, best known for the comical role of family patriarch Žika Pavlović, which he played 10 times in the “Lude godine” series of films.

Ghidra appeared in six Euro-westerns from a supporting role under his real name in “Frontier Hellcat” (1964) to “Tequila Joe” (1968).

Ghidra was married to actress Ljiljana Kontić, is also an actress [1931-2005]. Anthony passed away on November 11 in 1993 in Belgrade, from liver cancer.

Today we remember Anthony Ghidra on what would have been his 80th birthday.