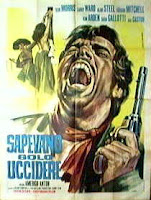 Jeff Smart and his friend Hernandez, are traveling to their homes when they are attacked by a band of "Mexicans", acting under orders from a boss that is known only the name Saguaro. In the clash, Hernandez dies, while Jeff, wounded in the shoulder, is saved by hiding in the waters of a pond. Smart is healed after the care of a woman, who welcomed him into her home, Jeff leaves for Lake City in search of the "Mexican", which he believes is also guilty of the murder of his parents. In the town after a duel with the gunman Clayton Foster, Jeff, at the request of the citizens, is appointed sheriff, and in this capacity unmasks the mysterious Saguaro, eliminating him along with his whole gang.