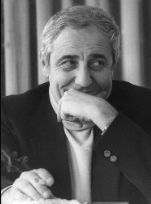 Giuseppe Moccia was born on June 22, 1933 in Viterbo, Italy and was an Italian screenwriter and film director. He wrote screenplays for 96 films between 1958 and 2001. He also directed 21 films between 1964 and 1997. His 1984 film “Il ragazzo di campagna” was shown as part of a retrospective on Italian comedy at the 67th Venice International Film Festival.

Today we remember Giuseppe Moccia, alias Pipolo, on what would have been his 80th birthday.
Posted by Tom B. at 7:16 AM