The English, BBC2 review — a stirring love letter to the great westerns

Story: Set in the mythic mid-American landscape in the year of 1890, The English follows Cornelia Locke, an Englishwoman who arrives into the new and wild landscape of the West to wreak revenge on the man she sees as responsible for the death of her son. Upon meeting Eli Whipp, an ex-cavalry scout and member of the Pawnee Nation by birth, they join together and discover a shared history which must be defeated at all costs, if either of them are to survive. 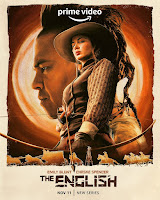 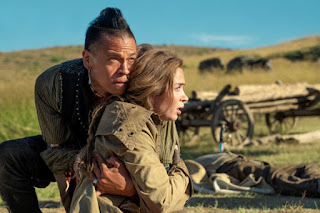 [‘Nothing fosters camaraderie quite like a shootout against cold-blooded mercenaries’]

In the 1960s we had the spaghetti western. Now the British film-maker Hugo Blick brings us the cream-tea western with his new BBC series about a patrician Englishwoman who traverses the American frontier of the 1890s in pursuit of her son’s killer.

The English is a six-part drama steeped in the storytelling traditions and visual vernacular of the genre. The tale it tells is a simple, time-honoured one of retribution, justice and self-determination, set in a landscape at once spare and stifling. But though our two heroes are the classic lost souls in search of meaning, they’re not exactly archetypal.

One is Lady Cornelia Locke (Emily Blunt), who may not be the first woman to make her mark in the machismo of the Old West, but is probably the first to do so from a family who “own half of Devon”. The other is Chaske Spencer’s Eli Whipp, a Pawnee native and former cavalry sergeant in the American army. That his identity and the broader historical context of this period is so foregrounded feels especially significant in a genre hardly renowned for its approach towards representation.

The duo first cross paths outside a standalone hotel where Cornelia emerges from a carriage, a shock of vital pink in an arid prairie, to find the manager (Ciarán Hinds) in the process of torturing Eli — who had been passing through on his quest to reclaim ancestral land in Nebraska. Her attempt to intervene is met with indifference by the stoic Eli and a beating from her host. This, they suggest, is no country for young women.

Those who underestimate Cornelia do so at their peril. She displays true grit in the face of the hotelier who, it transpires, plans to kill her until help comes in the form of Eli, fresh from escaping his own dramatic ordeal. He assures her that he was only acting in his own interest, and is seemingly unmoved by her plea for support on her revenge mission.

What follows is a treacherous cross-country journey in which the two forge an engaging rapport built on shared experiences of loss and existential uncertainty. And nothing fosters camaraderie quite like a shootout against cold-blooded mercenaries.

Between the exquisitely choreographed stand-offs — all twitching fingers and shifting eyes — the Morricone-inflected soundtrack, the sweeping vistas and the cool, broody dialogue, Blick delivers a stirring love letter to the great westerns of yesteryear. But this is as much a human drama as it is a laudable pastiche, driven by strong, textured characters who manage to stand out in the vast expanse. Amid the ubiquity of death, The English doesn’t forget to emphasise the richness and complexity of life.