The actor is the child most demanded by the cinematographic fiction of Tabernas to embody its characters. 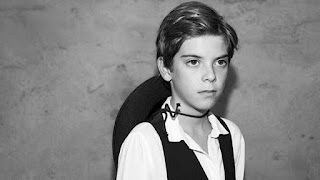 Darío Corral Hernández, nicknamed "Darío Peter", is only 11 years old, and was born on November 29, 2010, in Almería. His young age can lead to misunderstandings, but this young performer, who found his vocation among the bushes and the stage of Tabernas de Almería, has chained projects tirelessly since his beginnings with 5 years of age in cinematographic audiovisual productions: “Morgan, él vino de lejos” (a short film directed by Toni Carre) was his debut in 2017; then came “La vaca moteada” (Anders Gullberg) and “Dollars de sangre” (José Corral Martínez and Didier Methivier) in 2018, a short and a feature film with a western theme filmed in Tabernas, Gérgal and Almería and; already after the pandemic, he has premiered in this 2022 (practically simultaneously) two new productions: “Frontera” (Martin Michiels and José Corral Martínez), a short film shot in Rancho Corral (also called OK Corral), a farm owned by his father converted into a town in the West; and a feature film: “A Bastard, a City and the Dead”, by the German Dirk Roche, which premiered for the first time this year at the Municipal Theater of Tabernas. In the same way, he has also participated in the film “A Dream Come True” (2022), by the Almeria director and actor Toni Carre, which will soon see the light. He is currently studying 1º of ESO at the IES Manuel de Góngora de Tabernas, and when he finishes his studies he wants to learn acting and English with the purpose of becoming a professional actor. Her favorite subjects are physical education and technology, because he likes his technology teacher and likes the topics covered in class. As for his hobbies, Darío likes to play Soccer and go to the villages of Tabernas characterized as a gunman, and now he is learning to ride a horse.

R. G. F.: How did your desire for acting come about?

Darius: I remember that my father always took me with him to his shootings and his visits to the film villages of Tabernas. A friend of his, José Antonio Carreño (Toni Carre), observed me and saw that I had self-confidence, so he gave me a small role for his short film Morgan, he came from afar. And this is how my adventure and passion for the world of acting began. I have to say that Toni Carre was the first one who believed in me at 5 years of age, for which I am eternally grateful.

Darius: Yes, I come from artist parents. My father, Jose Corral Martinez (Joe Conrad), is the co-director of Frontera and Blood Dollars. He worked as part of the figuration in a series about Jesus Christ that was filmed in Sierra Alhamilla (Almería). Recently, he has worked as an extra in the film Eureka (2022), by Lisandro Alonso, alongside Viggo Mortensen, who starred in one of the main roles. His latest work as an actor has been in the feature film Un bastardo, una ciudad y los muertos (2022). My father's love for cinema comes as a child (as does me), because he lived in a farmhouse in Tabernas that was very close to the towns and went to the spaghetti western shoots that took place there in the early 70s. As for my mother, Mayra Hernández Gaytan (born in the Mexican state of Jalisco), daughter of a Spanish father and Mexican mother, I remember very well that a year ago she participated as an extra in a film that was entitled1000 lines, and that has not yet been released. And, on the other hand, my only brother I have, Elias, 8 years old, dreams every day of being a film director (we smile).

R.G. F.: Having the support of your parents is essential...

Darius: Yes, they help me with their unconditional support, day after day, to calm me down and feel confident when I am in front of a camera. Also, when I ride with my father, I have a good time. I really enjoy acting.

R.G. F.: Have you made friends your age in this world of cinema?

Darius: My friends don't like acting, because they're embarrassed. But I have always counted on my friend Eduardo, who is a little older than me, although now I have less contact with him because my family and I moved house and area. He is the son of Eduardo Garrido, a great recreationist, along with his wife Marta. Both are big fans of the western; his entire family participates year after year in the historical recreations of Oasys MiniHollywood. And, of the adult actors, my best friend is Luis Angel Sopa (Luis Clint).

Darius: Because of my physical resemblance to German actor Peter Lee Lawrence, who sadly passed away very young at the age of 30.

R.G. F.: In 2018 you were given a role in La vaca moteada, a professional production created for a foreign television. How was this possible?

Darius: The Spotted Cowis the title of the second western-style episode of the television seriesIgnite the Tizonazo. It turns out that one day his director and teammates came to Oasys MiniHollywood looking for people who wanted to participate in a shoot and hired my father. Then they asked him if he knew a child actor and he introduced me to them, and they liked me. That's how I got my little role in this short film made in different locations of Tabernas and Gérgal.

R. G. F.: What has been the production in which you have enjoyed the most?

Darius: Without a doubt, Border. Because I had a great time shooting with my father's friends and I really liked the role they gave me. I played Pedro, the son of Anna, the protagonist, who was played by the Biscayan actress Isabel Rebolledo.

R.G. F.: You met the Italian actress Claudia Cardinale in person. How was it and what dealt with her?

Darius: I met her at the eighth edition of the Almería Western Film Festival (AWFF), when she received the "Tabernas de Cine" award, in 2018. Well, my father, who is a painter, fond of drawing (who works with materials and techniques of charcoal, graphite and oil), made a portrait of Claudia Cardinale as a gift and, of course, I had the great honor of delivering it in person to her in hand at the Municipal Theater of Tabernas, where she received this award.

R. G. F.: Speaking of the AWFF, have you ever had the opportunity to participate in the activities carried out by this festival?

Darius: Every year I participate in the AWFF in the Tabernas parade, I do it walking while doing pirouettes with my revolver (I am good at handling it). Already within the programming of the festival, not long ago I participated in the recreation of a scene of Until his time came, which my colleagues and I made in Western Leone (the original setting of the film). I played one of the McBains' three children. Specifically, it is the scene in which some outlaws come home and shoot with my family. I leave the house last, and they shoot me dead.

R. G. F.: Who makes you the gunslinger's clothes? And where do you get the rest of the outfit and accessories?

Darius: My gunslinger clothes are ordered by my parents from a seamstress friend of theirs in Malaga. The Mexican clothing, hats, boots, spurs and ponchos we bring from the State of Jalisco, Mexico, when we go to visit my cousins who live there. We buy the revolvers in the shops of the villages of Tabernas; I use piston revolvers (for my own safety), and my father blanks and imitations.

Darius: A few years ago, I participated in one of the video clips of the Almeria musical group The Wanders, under the direction of Benaducense director Andrés Macho and I did it dressed in a Mexican poncho and carrying a rifle. In his next film, Los silenciados, which will be the second part of Bendición, sangre y nácar(not yet released), Andrés is going to give me an important role.