Who Are Those Guys? ~ Franco Cobianchi D’Este 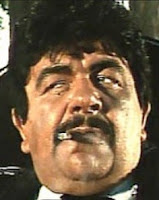 Lanfranco Cobianchi D’Este was born in Orbignano, Pistoia, Italy October 3, 1930.He was an Italian character actor, mostly in small parts, who was active in Italian films from the mid-1950's until the end of the 1960's. He also has a number of credits as a screenwriter and one as an assistant director.

He was credited on occasion under variations of his name such as "Franco D'Este", Franco Cobianchi D'Este", "Lanfranco Cobianchi", so from that we can possibly surmise that his full name could be "Lanfranco Cobianchi D'Este". He was also credited in a number of films under the pseudonym "Peter White". In the later years of his career he played a surprisingly large number of Roman emperors in peplums and blue-eyed Mexicans in spaghetti westerns. His career mysteriously ends after 1969.

Why Lanfranco dropped out of the business is unknown but he died in Coccomaro DiCona, Italy on July 12, 2015, at the age of 84.

If You Want to Live... Shoot! – 1967 (General Alvarez/Alvera) [as Peter White] [also credited as screenwriter and assistant director]