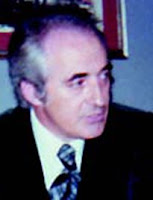 Eugene ‘Gene’ Luotto was born in Astoria, Queens, New York on December 29, 1925. He was an Italian-American screenwriter, dubbing director and voice actor.

Luotto came to Italy after a divorce, where he found work as a screenwriter and later as a dubbing director. Numerous films have been translated into English by him and he supervised their international versions. Gene’s two sons Steve and Andy both are active in films and dubbing. Andy has a TV show about cooking and both have Facebook pages. Andy came from New York City to Rome at 15 to live with his father. Question then arises was Gene an Italian American or was he Italian and married an American woman and moved to New York. Andy the youngest son was born in 1950's. Gene was a co-writer on the screenplay of Guy Madison’ "Gunmen of the Rio Grande" (1964) as well as the English dialogue for "They Call Me Trinity" (1970), "Trinity is STILL My Name" (1971) and "Buddy Goes West" (1981).

They Call Me Trinity – 1970 [English dialogue, English voice of Chico]

The Ballad of Ben and Charlie – 1971 [English dialogue, English voice of ?]

Trinity is STILL My Name – 1971 [English dialogue, English voice of ?