Voices of the Spaghetti Westerns ~ “Zorro the Avenger” 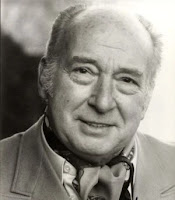 Alf Marholm was born Alfons Stoffels in Oberhausen, Ruhr, Germany on May 31, 1918. He went to school in his native town and made his stage debut there in 1938 at theStadttheater. His best-known role was later that of administrative director Mühlmannin the ZDF TV series ‘Die Schwarzwaldklinik’ (1985–1989). Marholm's career as an actor and voice actor began in 1952 with the film “Postlagerd Turteltaube”. For many years he was the German voice of Count Zahlon on ‘Sesame Street’.

Almost more famous, however, was the distinctive voice of Alf Marholm, which he voiced as Guy Trejeanas Louis XIII. in “The Three Musketeers” (1961), Ivor Dean in the role of Long John Silver in the adventure four-parter ‘Treasure Island’ (1966),Robert Morleyin “The Killer Ship” (1971), Leo McKernas Bill MacGuirein “The Day the Earth Caught Fire” (1961) and Howard Da Silva, Bernard Blier, Brian Aherne, Michel Simon and other international actors. He was also heard in numerous radio plays, such as in some Paul Temple radio plays, which were produced by the NWDR and later the WDR.

Alf Marholm died on February 24 2006 at the age of 87 in Waldbreitbach, Neuwied, Germany.