Who Are Those Singers and Musicians? ~ Delirium 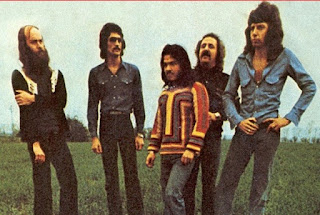 DELIRIUM is an important band in the history of Italian progressive rock music, having been active since 1970. They originally formed in Genoa during the late 1960s as I SAGITTARI and their line-up consisted of Ettore Vigo (keyboards), Peppino Di Santo (drums, vocals), Mimmo Di Martino (acoustic guitar) and Marcello Reale (bass). The later arrival of Ivano Fossati (vocals, keyboards, flute) completed the band, whose early musical style was a mix of the so-called Italian melodic tradition and UK progressive influences, in particular ‘King Crimson’ and ’Colosseum’. In February 1972 their memorable TV presence at the Sanremo music festival gave them their best success ever with the hit single Jesahel, soon followed by a similar song, Haum! During their career Delirium mixed the commercial side of their singles with the more difficult approach of their albums, and this is particularly evident in this first phase.