Who Are Those Singers & Musicians ~ Tony Del Monaco 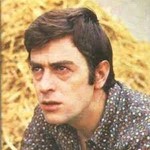 Antonio ‘Tony’ Del Monaco was born in Sulmon, Abruzzo, Italy on December 27, 1935. He started in show business as an actor, appearing in the 1961 musical comedy “L'adorabile Giulio”, starring Carlo Dapporto and Delia Scala. In 1965, he performed on the TV show ‘Campioni a Campione’ with the song "Vita Mia", which he'd composed, and which entered the Italian pop charts.

In 1959, he debuted at the Vibo Valentia song festival, ranking 3rd with the song "Al ciel manca un angelo". In 1967, he participated in the Sanremo Festival with "È più forte di me", paired with Betty Curtis, and released "Una spina e una rosa" the same year. Del Monaco competed in Sanremo again in 1968, paired with Dionne Warwick, with the song "La voce del silenzio "; in 1969, with "Un'ora fa" paired with Fausto Leali; and in 1970, with the Claudio Villa song "Serenata".

In the 1960s and 1970s, Del Monaco composed many songs that were covered by star singers of that era, such as "L'ultima occasione" by Mina and Tom Jones.