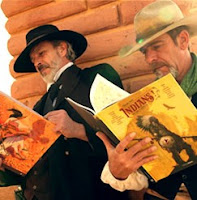 The Grand Angle collection becomes a partner of The Ultimate Western on the occasion of the release of "Indians": When the greatest authors of western comics meet the greatest life-size western role-playing game in the world.

On the occasion of the release of "Indians – the black shadow of the white man – Volume 1" scripted by Tiburce Oger and bringing together an impressive collective of the greatest French cartoonists, the Grand Angl e collection (Bamboo Editions) is associated with the Ultimate Western, the largest full-scale western role-playing game in the world.

With "Indians – the black shadow of the white man – Volume 1", Tiburce Oger tells us the epic of the Indian people, from 1540 to 1889, during the conquest of the West. Indians reveals, through 16 stories, the story of a people marked by the hegemonic excesses of these unscrupulous "pale faces"...!