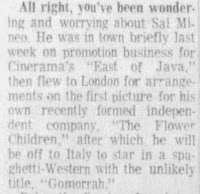 All right, you’ve been wondering and worrying about Sal Mineo. He was in town briefly last week on promotion business for Cinerama’s “East of Java,” then flew to London for arrangements o the first picture for his own recently formed independent company, “The Flower Children,” after which he will be off to Italy to star in a spaghetti-Western with the unlikely title “Gomorrah”.

Gladiole Films (for Anglo-EMI)... Avianca's Maurice Stanton to Israel re coproduction of "Magnificent Mexicans" and "The Wrong People" latter with Sal Mineo directing.

Correcting an earlier report, I's Murray Smith, not Robin Estridge, who has scripted "Wrong and Fran Avianca and Jack Gross Jr. who wrote "Mexicans" Estreidge screenplayed Avianca's upcoming "God Protect Me From My Friends"... Producer Ewan Lloyd due in Hollywood.