We continue our search for filming locations for “The Mercenary”. Paco has all of the leading citizens, landowners and politicians of Santa Rosita in custody and is dealing out justice as he sees fit even to Pepote who worked with Paco in the mines, saved his life but when sent to buy guns for the revolution spent the money on women. Paco lets him live but has him castrated so he will keep his promise never to have women again.

This scene was filmed in Madrid, Spain. 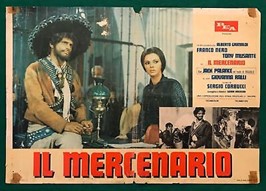