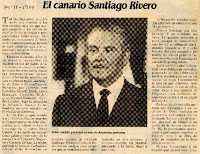 Perhaps that name says little, or perhaps nothing, to the youngest, nor to the credit titles of movies and television productions. However, the definitive absence of Santiago Rivero from the Canary Islands was noted because he was an excellent actor in theater, film and television.

Seventeen years have passed since his death, which occurred in Madrid on August 5, 1982, and memory alerts us to his good interpretative trace from his happy interventions as a notable fan in this his hometown: “Mariane-la, El Nido or El conflicto de Mercedes”, for example, with Conchita Ricolfi, Maria Luisa Marquez, Conchita Rodriguez, Manuel Romero...”'Cuadro Galdos”, under the direction of Sebastian Suarez Leon, also our teacher in “The Mayor of Zalamea”.

In the days when he, granted a scholarship by the Island Council, went to the Insular Conservatory of Dramatic Art, a beautiful tribute was paid to him at the Perez Galdos theater, and it did not take long for him to become the leading man-leader in the company of Fulgencio Nogueras and Carmen Ortega. The night that the group debuted with El Famoso Carballeira in our coliseum, when Santiago Rivero burst onto the scene, his friends started a round of applause that suddenly turned into a warm and extensive ovation. In Madrid, longing for the land, he came to tell us,

I can't remember that applause without getting angry. My countrymen...

Because Santiago was very Canarian. And he has not forgotten the lares of him. He liked to refer to them because they consoled him -he said- in the forced distance from him. He kept a lot of history of Spanish cinema and theater. His last film was “Seven Women”, with Nadiuska as the protagonist.

He would also be an indisputable value in dubbing movies, lending his ringing voice and remarkable diction to several of the "stars" in vogue. The list in which he took part is endless -more than two hundred-, several of them, such as “Raza and Los ultimos de Filipinas”, with the character of blockbusters and the leading role.

He appeared frequently on the small screen and in the 'Western' films shot in Almeria we used to see him appearing as a judge, head of rural areas, bank manager or father of the lady in love. We do not remember him incarnated as ignoble or harsh characters, because those characters did not suit his comedy actor fiber.

We have remembered a dead person who still seems to be alive.

Another Dollar for the McGregors – 1970 (poker room host) 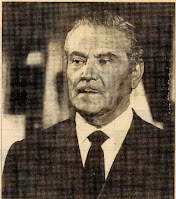