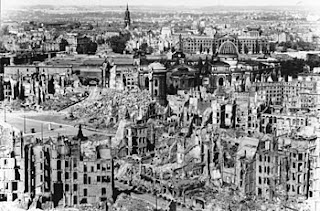 During his childhood, Mario Girotti later he’d take the stage name Terence Hill lived in the small town of Lommatzsch, Saxony, Germany. He was there through the end of World War II (1943–1945) and survived the Bombing of Dresden.

The bombing of Dresden was a joint British and American aerial bombing attack on the city of Dresden, the capital of the German state of Saxony, during World War II. In four raids between 13 and 15 February 1945, 772 heavy bombers of the Royal Air Force (RAF) and 527 of the United States Army Air Forces (USAAF) dropped more than 3,900 tons of high-explosive bombs and incendiary devices on the city. The bombing and the resulting firestorm destroyed more than 1,600 acres (6.5 km2) of the city centre. An estimated 22,700 to 25,000 people were killed. Three more USAAF air raids followed, two occurring on 2 March aimed at the city's railway marshalling yard and one smaller raid on 17 April aimed at industrial areas.