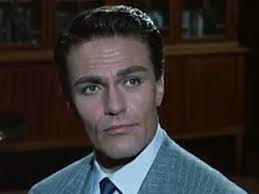 Roger Browne was born in Cincinnati, Ohio on April 13, 1930. He enrolled in pilot training while serving in the U.S. Air Force, flying the AT-6 trainer aircraft. Browne completed 64 hours of training, including 20 hours of solo flight but was unable to finish due to airsickness and related symptoms of Manifestations of Apprehension (MOA).

While studying acting and getting bit roles he supported himself as a physical therapist. One of his clients was going to Rome and asked Roger if he would come with him to carry on his work. As the 1960 Summer Olympics were under way, Roger eagerly accepted the offer. He remained in Europe where he was discovered and offered a role in the Jayne Mansfield film “It Happened in Athens”. Upon his return to Rome Browne was asked to appear as Mars in “Vulcan, Son of Give” and repeated his role in the film “Mars, God of War”. With the decline of the sword and sandal genre Browne moved into the Eurospy genre.

Roger lived in Rome from 1960 to 1980 and made films throughout Europe. He had roles in more than 30 films and television shows and dubbed more than 800 films and productions. He served as the president of the Associazione dei doppiatori di lingua inglese - (ELDA) where he dubbed his voice in 800 films. Roger has worked with Franco Nero, Sophia Loren, Luciano Salce, Anthony Quinn, Vittorio Gassman, Ernest Borgnine, Rita Tushingham, Richard Lester, the Taviani Brothers, Yoko Tani, Gordon Mitchell, Charlie Fawcett, and Jayne Mansfield. He is best known for his role in “Argoman the Fantastic Superman” (also known as “The Incredible Paris Incident” and “Come rubare la corona d'Inghilterra”), 1967. He also appears as himself in the Fine Brothers Elders React series.

They Call Me Trinity – 1970 [English voice of Terence Hill]

Trinity is Still My Name – 1971 [English voice of Terence Hill]

My Name is Nobody – 1973 English voice of Terence Hill]

Roger Browne's brush with a spaghetti western
Mr. Browne told Larry Anderson ..
... I started a Western once but it fell through after one week [Machado, July 1967]. I think it was eventually made
with Gianni Medici [Revenge for Revenge, September 1968], who I knew from New York when (we) were doing (a) Fotoromanzi.
He was drunk...
Anyway... in my opinion I didn’t have the right look for Westerns, I was about 40, not weathered or gritty enough, too baby faced.
I would have done one if offered though. I never turned anything down.
Submitted by Larry Anderson / Roger Browne