Who Are Those Singers & Musicians ~ Ashton, Gardner & Dyke 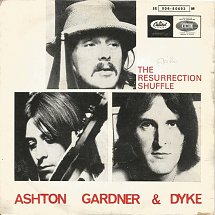 Ashton, Gardner and Dyke were formed in 1969, consisting of Tony Ashton (vocals and piano/keyboards), Roy Dyke (drums), Kim Gardner (bass guitar), and Mike Liber (guitar).  Ashton and Dyke were members of The Remo Four, a Liverpool band formed in 1963 and disbanded in 1969.  Their biggest accomplishment was backing George Harrison on his 1969 solo album “Wonderwall Music”.  Tony Ashton and Roy Dyke then teamed with Kim Gardner to form Ashton, Gardner and Dyke.  Former Python Lee Jackson band member Mike Lieber became the groups lead guitar player, but for whatever reason did not get his last name included in the band name.  Ashton, Gardner and Dyke is considered to be a one hit wonder band since their only Billboard Hot 100 hit song, “Resurrection Shuffle,” (#40 Billboard Hot 100) was the only song to peak inside the Hot 100.  They did, however, record three studio albums over their four years of existence as well as play on the soundtrack for the 1971 Joe Namath B-Movie, “The Last Rebel”.  The movie’s score was written by band member Tony Ashton and Deep Purple band member Jon Lord.  In 1971 the band made their last album, “What a Bloody Long Day It’s Been,” changing their name to Ashton, Gardner, Dyke and Co. They did this to include not only Mike Liber, but also brass players Lyle Jenkins and Dave Caswell, formerly of the band Galliard.  The group disbanded during the early 1970s music era with Aston joining Jon Lord and Ian Payce in the band Paice, Ashton & Lord, while Dyke and Gardner joined the band Badger.  Tony Ashton and Kim Gardner both died of cancer in 2001 at the age of 53.