“Up the MacGregors” (“Sette donne per i Mac Gregor”, Franco Giraldi, 1967), a kind of sequel -superior to its predecessor- of “Seven Guns for the MacGregors”, premieres an unprecedented location in Granada, specifically in the spectacular badlands of the municipality's desert de Gorafe, where a small setting with a rudimentary cabin is built, in a location somewhat removed from those discussed so far. The photography of the Spanish operator Alejandro Ulloa takes great advantage of all the filming locations, some of them recognizable from previous productions, such as the Guadix cave houses, where an unusual religious procession takes place, or the Bancos de Fonelas boulevard. However, Giraldi goes a little further this time than his predecessors when he travels along the La Calahorra railway, locating a sequence in a farmhouse (still standing and in the same condition as in the film) near the mines of Alquife, from where you can clearly see the very close Renaissance castle of La Calahorra. The scene in question includes shootings and spectacular explosions very close to this farmhouse where Giraldi has placed the camera.

[Set located in the Gorafe Desert, built expressly “Up the MacGregors”.]

[The procession through the caves of Guadix in “Up the MacGregors”.]

[ Farmhouse near Alquife in “Up the MacGregors”.]

You can see that same cabin in the Gorafe desert came in handy for the team of “Any Gun Can Play”” (“Vado… l’ammazzo etorno”, 1967), a western that runs through very different areas of Granada. It is not even remotely one of the best Western films by its director, Enzo G. Castellari (who would also return to locations in the province for two more Westerns); again, some too crude comic notes weigh down the final result of the film. But this is not an obstacle for Castellari to demonstrate ambition and good work in general, especially with regard to the choice of diverse and photogenic settings. He takes the risk of shooting in a location even further away than usual, very close to the capital of Granada, such as the leafy Sierra de Huétor, a scene that would later be visited by another North American western, “100 Rifles”, by Tom Gries, 1969). On the increasingly familiar route from La Calahorra-Alquife mines, before anyone else he pays attention to a small metal railway bridge, widely seen in later films[11], to record on the screen the assault on a train loaded with gold. 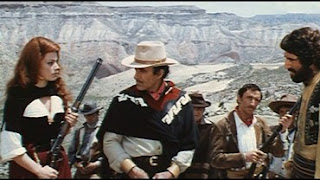 [The desert of Gorafe in “Any Gun Can Play.] 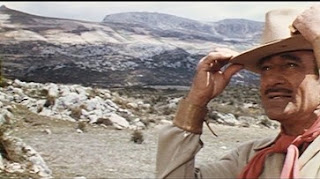 [Gilbert Roland in “Any Gun Can Play”: the first gunman to ride through the Sierra de Huétor.] 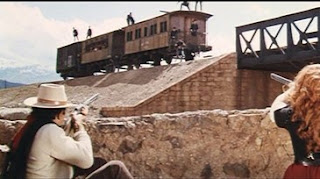 [The metallic bridge of the Rambla de Fiñana de La Calahorra in “Any Gun Can Play”.]