Kill Them All and Don’t Come Back Alone – English title 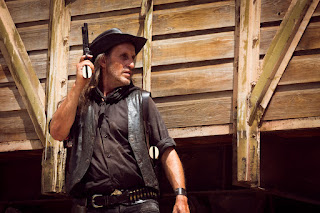 1880. In a man´s world, Carol tries all she can to rescue her daughther, who has been kidnapped by Rubio´s gang. All hope seems to fade until the arrival of Diana, a bounty hunter.

Diana represents and embodies a “new” woman. Independent, who is searching for her own path without the need of a man. Diana is the antihero of the movie. And she would represent the revenge of all women that have been battered in so many films, especially in the western style. Metaphorically speaking (or maybe not), she would be the incarnation of goddess Diana (Artemis) in a gunwoman. All suffering from Carol derive from the fact that she is a woman in a male chauvinist world. Diana is the one of the most feminist goddesses by far, independent, protective of nature and women. It wouldn’t be the first time that Diana, according to the classical mythology, decides to intervene because of the “hybris”. This is a Greek word that determines the human actions that fall in the excess and arrogance. Cinematographically speaking, the character of Diana is very much influenced by Clint Eastwood’s “Pale rider” (1985) movie.