A New York Times profile of Charles Bronson once noted that “Bronson looks like as if at any moment he’s about to hit someone.” It’s tough to think of a better way to summarize Bronson’s five-decade film career than that. Since the forthcoming July/August issue of mental_floss contains a picture of Bronson, we thought he would make a good second installment for our new series “Five Things You Didn’t Know About”. Here’s what you might not have known about one of film’s most menacing presences:

1. He Changed His Name for Joe McCarthy (Well, Sort Of)
The man we all recognize as Charles Bronson was actually born Charles Buchinsky in the coal-mining town of Ehrnenfield, PA. It would be a gross understatement to say he was from a large family; Bronson was the 11th of 15 children born to a pair of Lithuanian immigrants. The family was so incredibly poor that when Bronson was six years old the only school outfit his mom could muster for him was one of his sister’s old dresses. (The ensuing teasing would turn anyone into a world-class tough guy pretty quickly.) By age 16, Bronson was working in the mines himself.

2. He Indirectly Helped Launch Clint Eastwood’s Career
Legendary Italian director Sergio Leone was an early fan of Bronson’s, and the director relentlessly tried to get the stoic tough guy to appear in his films. When Leone started production on A Fistful of Dollars, the first film in the “Dollars trilogy” and the first to feature the “Man with No Name” character, he tried to get Bronson to take the lead role. Bronson thought the script was terrible and refused. Eventually, Leone offered the role to Clint Eastwood, a decision that worked out fairly well.

Bronson wasn’t through turning Leone, down, though. Leone allegedly offered Bronson the role of the sadistic mercenary Angel Eyes in The Good, the Bad, and the Ugly, but Bronson had to back out due to his commitment to The Dirty Dozen. (Instead, Lee Van Cleef unforgettably played the role.) Eventually, though, the two men worked together when Bronson turned in one of his best performances as a haunted harmonica-playing gunfighter in Leone’s epic Once Upon a Time in the West. 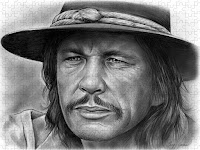 3. He Conquered Europe First
Although Bronson’s film career began in 1951, he wouldn’t become a huge star in the U.S. for another couple of decades. While Bronson was in several beloved high-profile films during the 1960s, many of them (like The Great Escape, The Dirty Dozen, and The Magnificent Seven) employed ensemble casts featuring much bigger names, like Steve McQueen or Lee Marvin.

In Europe, though, Bronson was a gigantic star. His adoring Italian fans called him “Il Brutto,” or “The Ugly One,” while the French referred to Bronson as the “monstre sacre,” or “holy monster.” In addition to turning in one of his strongest performances in the Italian film Once Upon a Time in the West, he also starred in the French thriller Rider on the Rain, which tore up European box offices and won the Golden Globe Award for Best Foreign Language Film.

Bronson was still making American movies in the interim, including 1972’s The Mechanic, a film I highly recommend as possibly the most bizarre American action movie ever made. (To boil it down: Charles Bronson is an existentialist Mob hitman. Yes, really.) He didn’t become a huge star in the U.S. until well after his 50th birthday, when he headlined 1974’s Death Wish in what would become his trademark role, the architect-turned-vigilante Paul Kersey.

4. He Didn’t Really Have a Death Wish
Bronson’s physique, terse nature, and choice of roles led people to believe that he was a legitimately tough customer, and the actor did nothing to change their opinions. As the New York Times mentioned in Bronson’s 2003 obituary, the actor like to regale journalists with tales of his arrests for assault and battery, the fistfights and brawls he’d gotten into, and his devotion to his knife-throwing hobby.