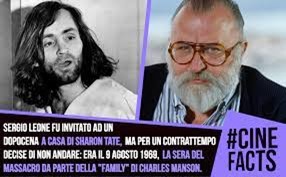 In August of 1969 Sergio Leone and Luciano Vincenzoni were in Los Angeles. They were invited to a party at Sharon Tates house. Vincenzoni received a call from the president of Warner Brothers who asked id he’d like to fly up to San Francisco and spend the weekend and he did. The following morning hearing about the murder of Sharon Tate Vincenzoni telephoned Leone expecting to hear he had been killed the night before. Leone answered the phone and told Luciano that since he didn’t speak English and Vincenzoni was gone he decided the party would be a bore so he stayed at the hotel and went to bed early that night.