Who Are Those Musicians & Singers ~ Aphrodite's Child 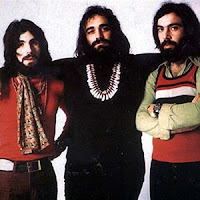 Aphrodite's Child was a Greek progressive rock band formed in 1967, by Vangelis Papathanassiou (keyboards, flutes), Demis Roussos (bass, acoustic and electric guitar, vocals), Loukas Sideras (drums and vocals), and Silver Koulouris (guitar). They initially found success in Europe with hit singles like "Rain and Tears", "End of the World", "I Want to Live", and "It's Five O'Clock". The band's career ended shortly after release of their most influential album, 666 (1972), which has appeared on a number of lists of the top progressive or psychedelic albums of all time.