It could be said that the most political aspect of the genre that concerns us, known as Zapata westerns or revolutionary spaghetti, also began in Granada. The opening scene of the founding title of the subgenre, “A Bullet for the General” (1967), testifies to this. In it, a counterrevolutionary firing squad was improvised on the wall of the garage of the Guadix railway station, and it would not be the last time that this city would pass for being Mexican. The film is a classic of the recently created vein, counting among its technical and artistic team with prominent members of the Italian Communist Party, starting with its director, Damiano Damiani, its protagonist, Gian Maria Volonté, and, above all, one of its screenwriters, Franco Solinas, author of the scripts for such combative films as “The Battle of Algiers” (“La battaglia di Algeri”, 1966) or “Queimada” (“Queimada!”, 1969), both directed by Gillo Pontecorvo. The facilities of the Guadix station are shown in detail at the beginning of the story - with the presence in the place of the other leading actor, Lou Castel, as well as the child actor Antonio Ruiz Escaño, better known as the "Nino Leone" of “For a Few Dollars More”, but once the train leaves for its destination, the Granada lands do not appear again in all the footage, being the Almeria railway the one that takes over. In this film, another popular locomotive appears for the first time, much in demand from that moment on for many shootings in Granada over the following decades, the Babwil 140-2054, so called because it was manufactured in 1928 by the North American company Babcok & Wilcox in its Spanish delegation from Bilbao, but also known colloquially as “la Baldwin” or “la Guadix”.

[The garages of the Guadix train station in "A Bullet for the General".] 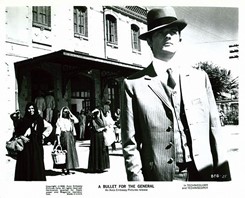 After Leone filmed for the first time at the La Calahorra-Ferreira station for “The Good, the Bad and the Ugly”, it was not long before other exponents of the Eurowestern followed suit. Such is the case of the excellent “Death Rides a Horse” (“Da uomo a uomo”, 1967), by Giulio Petroni, a director who would return to the province again to make two other westerns. In the case of this film, the arrival of Lee Van Cleef by train at the station of a city baptized for the occasion as Lyndon City occupies very few minutes on the tape.

Something similar is carried out by another great master of the Italian western, Sergio Sollima, in his magnificent and politically committed “Face to Face” (“Faccia a facia”, 1967), returning to the Tucumcari station dreamed of by Leone, this time under the suggestive name of Purgatory City, where Gian María Volonté and his entourage of collaborators take a train. Later, the same place, but from a different angle, will be the scene of the robbery of the passengers of another train by bandits, with the unmistakable background of the Gor-Baza mountain range, so often portrayed in films of the genre.

[Tucumcari becomes Purgatory City for the filming of “Face to Face”]

[Another scene from “Face to Face” in the plains and via de La Calahorra, with the Gor-Baza mountain range in the background]