The Wild West killer who helps the Pope

The cowboy swaggers into the saloon with a snarl. His evil face and killer grin show that he’s a real baddie, no kidding.

But that’s strictly for the film set. In real life Italian actor Carlo Gaddi has a part that is far removed from the make-believe world of goodies and baddies.

Thirty-two-year-old Carlo, who plays the nastiest most ruthless cowboy who ever roamed the Italian West has the official, Vatican title of: Extraordinary honorary chair-bearer to the Pope.

On historical Vatican occasions Carlo can be seen hovering discreetly in the background keeping a watchful eye on the Pope.

The ruthless renegade even appears on a Vatican stamp. (see left)

Carlo was born in the Vatican (an Independent State) and he was a Vatican citizen till he was twenty-two, when he chose to become and Italian.

He says, “I could have kept my Vatican citizenship, but I would have had to live there and be inside the gates by 11:30 every night.

Carlo, then working as a stockbroker was appointed chair-bearer by Pope John eight years ago.

He became one of the chosen few who work in the Papal apartments and are close to the Pope on all public appearances.

Carlo is following tradition. The Gaddi family has worked in the Vatican for sixty years.

“But my Vatican work isn’t a job. It’s something for life. I do it willingly. It’s an honour.”

Which may be alright for Carlo but doggone it, baddies still never seem the same again. 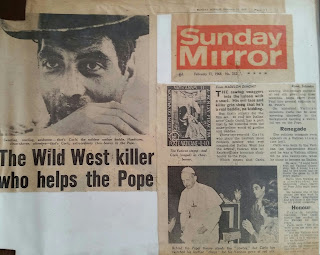