Giulio Petroni, the director of the already mentioned “Death Rides a Horse”, makes another brief stop on a train at the “Tucumcari” in La Calahorra for “And for a Roof a Sky Full of Stars” (“…e per tetto un cielo di stelle”, 1968). We can only see some shots of the criminal clan momentarily commanded by Federico Boido awaiting the arrival of the true leader of the gang, played by an autumnal Anthony Dawson. This unequal film, with the great Guiliano Gemma as the absolute star, shares memorable moments with others of the same caliber as the later comedic and buffoonish spaghetti of the seventies. And, although the scene described does not include the presence of Gemma, everything seems to indicate that the Italian star was in La Calahorra shooting a sequence not included in the final cut [12].

[Anthony Dawson in “And for a Roof a Sky Full of Stars”, getting off a train in La Calahorra.]

Gianni Garko was without a doubt another of the most popular stars of the golden age of Eurowestern. Shortly after getting into the skin of the mythical character/icon Sartana for the first time, he arrives in Granada to star in The Avenger of the South “The Taste of Vengeance” (“I vigliacchi non pregano”, 1968), an irregular western with a twilight tone very different from those belonging to his long saga of the player bounty hunter, more oriented towards the pulp. The director, Mario Siciliano, is not able to give the film rhythm despite the correct invoice that he demonstrates, neither in its original Italian version nor in the very shortened Spanish copy. The best asset of the film is found in the cast, with good performances by Garko himself, Ivan Rassimov and the Spanish actress Elisa Montés. Once again, the Bancos de Fonelas boulevard, the Guadix caves, the Hernán-Valle plains and a location map in the Gorafe desert were recorded on the celluloid of this Western film. 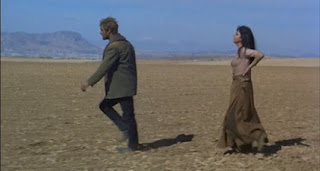 [“The Taste of Vengeance”. Gianni Garko and Elisa Montés on a long walk through the desert plains of the Rambla del Grado, in Hernán-Valle. In the background, the omnipresent Mencal hill, recognizable in a multitude of westerns filmed in this area.]

This is a good place to take a refreshing break on our particular tour of western Granada locations, which has included the beginning and most of the splendor of the genre in the province during the sixties. In subsequent installments we will comment on the subsequent and indelible traces that Sergio Leone left on these lands, with the construction of a stable western town in La Calahorra for Hasta que su hora arrived “Once Upon a Time in the West” (“C'era una volta il west”, 1968) as a high point. In the same way, we will analyze the locations and details of the rest of the Granada filming of the current during the seventies and eighties of the last century. Francisco Arco

12] In an interview included in the magnificent book Giuliano Gemma. A land, a sword and a gun; Dilating Minds Editorial; 2019; P. 224, by Belén Mateos Járrega, the production director of this film, José Salcedo, says that a scene was shot in La Calahorra with the presence of the two protagonists of the film, Giuliano Gemma and Mario Adorf, together with the Spanish secondary actor Víctor Israel. Apparently, Mario Adorf refused to perform this scene because he was deeply anti-Semitic, alluding that Víctor Israel was Jewish, simply because of his last name and without any other convincing evidence. Finally, at Adorf's insistence, they chose another actor who appeared with his back to the camera so as not to lose continuity with previous scenes in which Víctor Israel intervened. It is not surprising, then, that this eventful sequence was finally discarded in the final cut of the film.