For some time now, interest in film tourism and the search for filming locations has only grown exponentially. And that fixation catches both fans and scholars alike. In the case of the westerns filmed in Spain during the sixties and seventies of the last century, this interest stands out especially, either because of the attractive natural settings used or because it was always an eminently popular genre, for (almost) all audiences. A palpable example can be found in the documentary “Unearthing Sad Hill” (Guillermo de Oliveira, 2018), which amazed half the world with the story of some fans who came from very different parts of the globe, willing to spend long hours working with pick and shovel to discover the cobblestone era, hidden behind decades of uncontrolled growth of vegetation, where Sergio Leone shot the final sequence of The Good, the Bad and the Ugly (Il buono, il brutto, il cattivo, 1966), set in a remote area of the Burgos mountain range, near the town of Contreras. The Spanish director Álex de la Iglesia, author of a film paying homage to the genre such as” 800 Bullets” (2002), reveals in the aforementioned documentary one of the keys that explains such an excessive passion on the part of these fans: “Cinema gives you the opportunity to be in impossible places, where it seems that you will never get to be in real life. Suddenly finding that those places, which seemed strange on the screen, exist, is more or less feeling that your dreams come true. And that's a fantastic feeling."

This kind of mythomania derived from the passion for cinema and, specifically, for certain scenes and locations burned into the spectators' retinas, combines a profitable way of choosing vacation destinations that combines contact with nature, hiking and culture through equal parts. For some, it may seem like an elaborate hobby reserved exclusively for the most geeks, willing to travel wherever necessary in order to step on the same ground as their idols, but the truth is that this practice began to become fashionable in a purely amateur way, long before all this information transcended ordered and documented, although not always complete, to the bibliographic market and the specialized media. How else can it be explained that one of the pioneers in the hunt for Spanish western locations, the Japanese Yoshi Yasuda, discovered many unknown filming locations for native viewers? Visiting his personal website [1], active since 1998, means entering a real tour of that "Spanish West" worth knowing and exploring. Almería took the cake in terms of shooting this type of film, and no one better than the non-profit association Almeríacine[2] has been able to document the exact locations of these abundant Almeria films. Madrid was another "hot spot" for the Eurowestern of those years, and there we have Javier Ramos recording it, first on his blog[3] and later in his excellent book El cine del Oeste en la Comunidad de Madrid (2019) [4], where all those locations are located with precise geographic coordinates[5]

The province of Granada is another of those great unknowns of the Spanish western by the average fan, even though it was the setting for thirty-seven films of the genre during the period between 1961 and 1985 - plus a late production for television made in the 1990s[6]-, highlighting among them those used by Sergio Leone in almost all his masterpieces of the genre. It would be acceptable to mention Yoshi Yasuda again as one of the pioneers in recognizing and cataloging these places in Granada for the previously mentioned website of his locations. Already in the new century, several books[7] emerged that gave a good account of the trail left by the westerns in the province, as well as younger location hunters such as the Italian Alberto Gamba, who, on his Facebook page[8], is exclusively dedicated to photographing each and every one of the places that Leone filmed his films. Nor could two of those responsible for Almeríacine, Juanen Pérez Miranda and Juan Gabriel García, leave these same enclaves out for their book/guide La Almería de Sergio Leone (2016)[9], devoting an inevitable chapter to the locations that the Roman director had frequented lands in Granada, despite the exact geographical delimitation of the title of the work.

And it is precisely to Sergio Leone that we owe the discovery and popularization of the province of Granada as the ideal setting for the Eurowestern since he placed the beginning of “For a Few Dollars More” (Per qualche dollaro in più, 1965) in some arid plains of the municipality of La Calahorra, strategically located between the Sierra Nevada and the Sierra de Baza. Who does not remember Lee Van Cleef forcibly stopping a train that, in principle, did not stop in Tucumcari, a name belonging to a city in the US state of New Mexico, and getting out with his horse from the boxcar in a small station to the amazement of the other passengers? In that precise place, actually a railway post to guard a nearby level crossing, a good handful of westerns would be shot in the years to come, including, emulating Leone, their respective stop at the same fictitious station, adorned for each occasion with his due props. The steam locomotive used in this film was 040-2169, better known as "La Verraco", seen countless times in subsequent films filmed in Granada.

The proximity of La Calahorra to the desert of Tabernas in Almería, where most of these films were shot, was a decisive factor for all these productions to land in the province of Granada. But no less so was the existence and availability in this area of ​​a section of railway, inaugurated in 1899 and at that time almost in disuse, owned by the company that exploited the nearby Alquife iron mines, which he saw in the rental of itself for filming a lucrative source of income. No medium-budget Western film could be left without such an important element for the genre as the railway, and, although there are other Spanish western locations where railway scenes have been shot, this old section that linked the Alquife mines with the nearby La Calahorra-Ferreira station is, without a doubt, the one that has been seen the most times on screen. Due to this availability of the railway, together with the suitability of the landscape and the badlands of these lands for Western cinema, Sergio Leone would return to Granada punctually in all the westerns that he shot after “For a Few Dollars More”. 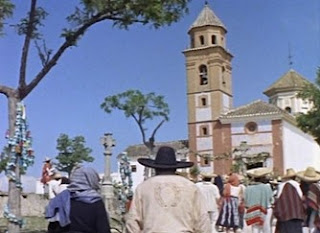 [1] http://y-yasuda.net/. Nor can we fail to recommend another wonderful location website (many of them from Granada) that appeared shortly after Yoshi's, whose content is signed by the German specialist in the field Carsten Thiemann: http://www.western-locations-spain.com.

[5] And, at present, he is preparing another book on the western filmed between Aragón and Catalonia, enclaves that were widely used at the time, although in need of the mandatory study that, fortunately, Javier is already carrying out.

[6] This is the German miniseries ‘Winnetous Rückkehr’ (Marijan David Vajda, 1996), also known in Spain as “The Return of Winnetou”, based on the mythical Indian character created by the novelist Karl May, which includes parts shot in the Sierra de Huetor and La Calahorra.

[7] First, the much-needed Guadix and the Cinema. History of film shooting in the region of Accitana (1924-2002); Association for the Rural Development of the Region of Guadix-Town Hall; 2003; by the historians Fernando Advantages Dote and Miguel Ángel Sánchez Gómez. Later, Il vicino West: set and location of the cinema western in Spain; Ribis; 2007; of the great world expert in western locations Carlo Gaberscek. Later, Granada and the cinema. His story; Editorial Almuzara; 2012; by the journalist Juan José Carrasco Soto, who covered many of those shoots, including those of Leone -unfortunately, these three mentioned works are currently out of print-. And, more recently, Granada in the Cinema; Spink Publications; 2015; (https://www.babellibros.com/libro/granada-en-el-cine_458524), book/travel guide signed by the brothers Said and Iván Zoido Salazar. All of volumes are essential, although, however, today they need an update to expand filmography and information.