A few years before Leone, there was a peculiar British precedent shot in Granada that points to almost all the ways of the western. We are referring to “El demonio, la carne y el pardon” (“The Singer Not the Song”, Roy Ward Baker, 1961), a Rank production in which a small church in the municipality of Las Gabias appears for much of the footage, home of the fictional priest played by actor John Mills. The religious theme that forms the backbone of the story, the car and the rather sixties costumes that we see in certain scenes are quite anachronistic elements within the genre, but, on the other hand, the Mexican setting of the town and that ruthless cowboy played by Dirk Bogarde did not leave any doubts of this affiliation to the western, albeit atypically. In any case, we are facing a pioneering title within the Western films made in our country a few years before the imminent spaghetti hatching. 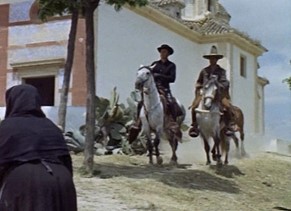 After “For a Few Dollars More”, the next Hispano-Italian film to come to these lands would be “Seven Pistols for the MacGregors” (Sette pistole per i Mac Gregor, 1965), directed by Franco Giraldi, who was Sergio Leone's assistant in his first Western, “For a Fistful of Dollars” (Per un pugno di dollari, 1964). It is a film that anticipates the comic elements that a few years later titles like “They Called Mr Trinity” (Lo chiamavano Trinità…, Enzo Barboni, 1970) would exploit with great success. As for the locations in Granada, Giraldi does not follow in the footsteps initiated by Leone, choosing for the first time some of the enclaves that would later be used in many later Westerns shot in this area. We refer to the photogenic Rambla de los Bancos, near the town of Fonelas, whose geological characteristics do not differ much from the classic scenarios par excellence of the West, such as the American ones of Monument Valley, in the state of Arizona. In the same way, this film would be the first to use the old railway section that ran between the town of Hernán-Valle and the city of Guadix, the second most used railway in the province in these shoots after the already mentioned La Calahorra -with the main difference that this new section did have regular train traffic and the Renfe company could only rent it for filming at certain times when its tracks were free, whose landscapes also had an undeniable desert and wild aspect. Giraldi is also the first director of a spaghetti that shoots in the picturesque area of the ​​cave houses in Guadix, made up of peculiar gullies and rocky promontories of clay and reddish earth that offers suggestive views that are very difficult to find in westerns shot in other Spanish locations. Finally, fleetingly, we can also see in this film a location shot of the facade of the church of Santiago de Guadix. 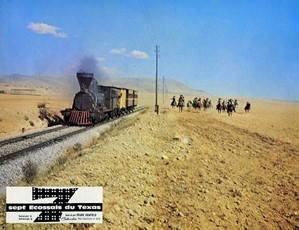 [French photochrom of “Seven Pistols for the MacGregors”, on the Hernán-Valle road. On the left, you can see the metal Grao bridge, the protagonist of a well-remembered scene from this film, the one in which Fernando Sancho climbs onto the roof of a wagon just as the train passes over] 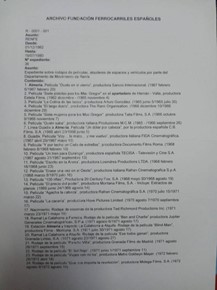 [The cave houses of Guadix in “Seven Pistols for the MacGregors”]