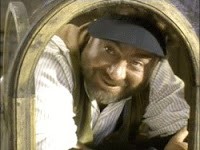 The Aragonese Roberto Camardiel was an "all-round" actor, in fact he made historical films, comedies, dramas, detective stories, adventures. A face that has embodied many varied characters with great success.

Beloved in Spain, he was even more loved in Italy by the spaghetti western audience of which he was an absolute protagonist, an omnipresent face.

He appears again in the Spanish westerns "Wild Challenge" by Jesús Franco, "Alone Against All" by Antonio del Amo, "$100,000 for Lassiter" by Romero Marchent, "The Challenge of MacKenna" by León Klimovsky, "Tequila!" by Tulio Demicheli and “God in Heaven… Arizona on Earth” by Juan Bosch. And it doesn't end here ...

He acted with Giuliano Carnimeo in “Fistful” and “The Return of Halleluia”. He was also in "I Can be Done Amigo" by Maurizio Lucidi, in "The Man from Nowhere" by Michele Lupo and in "Between God the Devil and a Winchester" by Marino Girolami. Impossible to count all his films. With his career, he really went through the whole spaghetti western.

He joined all the greats of the genre, from Tomas Milian to Peter Lee Lawrence, from Giuliano Gemma to Robert Woods, from Anthony Steffen to George Hilton. For the public, however, he is above all the telegraph operator of Tucumcari of "For a Few Dollars More".