I’m Ready For My Close-Up, Mr. Leone: How a Shot Defined the Western

Sergio Leone put the Western genre under a microscope. Or at the very least, a macro lens. 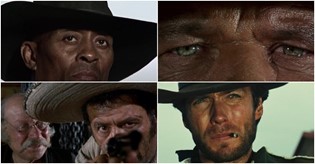 In Westerns, it’s always a good idea to be quick on the draw. So let’s get one thing straight right off the bat: not all Spaghetti Westerns were directed by Sergio Leone. But Sergio Leone was almost singularly responsible for the vast amount of tropes we associate with Spaghetti Westerns.

Enjoying a heyday from the early 1960s to the mid-1970s, the genre took its name from the fact that they were principally directed and produced by Italians. Often with collaborative help from other European nations. There are a number of formal and thematic qualities that define the Spaghetti Western. And I would genuinely relish the opportunity to move through them one by one. But for the sake of brevity (and to segue into today’s video essay), this summation generally holds true: the Spaghetti Western is chiefly defined by its subversion of the Hollywood Western.

Classical and especially pre-war Westerns were fixated on a distinctly romantic kind of American myth-making; on heroic tales of square-jawed men burdened with the glorious purpose of defending nascent society from impending lawlessness. Hollywood Westerns sanctified the individual, and all his fist-flinging, manifest density. And when cultural attitudes about “what makes a hero, exactly?” began to shift in the countercultural haze of the 1960s, the Western was far from immune. Enter: Sergio Leone, an Italian director who made an art form out of desecrating the sanctity of one of Hollywood’s most iconic genres.

With Leone’s Dollars trilogy (A Fistful of Dollars, For a Few Dollars More, and The Good the Bad and the Ugly) as its sacred text, the Spaghetti Western actively undermined the white hat/black hat moralism of its source material, bringing all the blood, sweat, and tears of the Wild West to the forefront. And Leone repeatedly used a visual technique to hammer this point home: the extreme close-up.

Holding a metaphorical microscope (and a literal zoom lens) up to the Western Genre, Leone underlined that he was purposing a new way of seeing things; a way that made space for bounty hunters who are also lawmen, good guys who do bad things, and heroics that turn to ash in your mouth. Leone’s extreme close-ups were done in the style of exploitation cinema to expose the exploitation of the Old West. To underline the stretched pores and streaking mascara that made the West a real place, rather than a fantasy.