Who Are Those Composers? ~ Enrico Polito 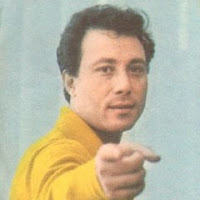 Federico ‘Enrico’ Polito was born in Reggio Calabria, Italy in 1929. After studying piano and guitar he moved to Rome where he collaborated with singer Domenico Modugno, Rita Pavone, Mina and Ornella Vanoni. In 1966 he discovered Massimo Ranieri and therefore wrote and arranged his best known songs ‘Rose rosse’, Vent’anni’, ‘Via del Conservatorio’ and ‘erba di casa mia’. In 1978 he founded the record label Pom Records for which he produces I Pom an Italian pop group and authored several successful songs, including for Soccer Supporter, TGS Direct Sport for Rai 2. In all he wrote 239 songs and collaborated with such composers and writers as Giancarlo Bigazzi, Franco Migliacci, Toto Savio as well as conducting, arranging and producing. As a solo artist he recorded the 45 rpm singles of  Dalla mia finestra sul cortile (1961), Indovina (1962), Sotto il sole (1963). He also won a Golden Burlamacco for Non ho pietà.