The American actor and singer Dean Reed, very popular in Latin America and in the Soviet orbit, filmed in Bajo Cinca half a century ago. 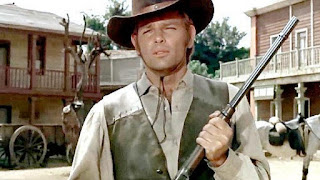 Fraga and its surroundings became the setting for the recording of some thirty 'Spaghetti westerns' between 1965 and 1972. There were eight exciting years in which the landing of the filming teams was an unforgettable incentive for the Fragatinos, especially for the children. The interpreters, some international, captured the most attention. The American Dean Reed, with his striking face and blond hair, was, perhaps, the most brilliant star of all those who paraded through the capital of Bajo Cinca.

Half a century ago, this actor and singer landed in Aragon to intervene in “Twenty Paces to Death”, a western that did not go down in the annals of cinema due to its quality. Under the direction of Manuel Esteba and a script by Manuel Ferrés Iquino, this Spanish-Italian co-production tells the story of a Confederate army sergeant who finds a mestizo boy buried up to his neck on the brink of death and rescues him. Years later, the child becomes an adult and part of his past returns with a thirst for revenge.

Reed, who was then 32 years old, already credited a peculiar vital and professional curriculum. Born in Colorado (USA) in 1938, he gave his first artistic works in his country as a rock singer to become an idol for young girls. In 1958, he was signed for that purpose by the Capitol Records label - Frank Sinatra's team - with which he released four 'singles' that did not enjoy the favor of the local public and did not enter the North American sales lists.

Surprisingly, some of those songs that had gone unnoticed in his native country triumphed in Latin America, especially in Chile, Peru and Argentina. After making a successful South American tour in the early 1960s, he felt the popularity he treasured and decided to settle in Chile and later in Argentina. He made many records, appeared on television programs and starred in numerous films. It was at this stage that he was renamed the 'The Red Elvis' for his ideological harmony with the left thanks to his relationship with progressive intellectuals and artists, such as singer-songwriter Víctor Jara. He did not hesitate to criticize the Vietnam War or perform free concerts in depressed areas. He also denounced the coup d'état against Salvador Allende and the subsequent execution of Víctor Jara in 1973.

After a coup d'état in Argentina in 1966, he emigrated to Rome, where he entered the films of the 'Spaghetti western'. It was the previous step to travel to the Soviet Union in 1970 and settle in the German Democratic Republic, specifically in East Berlin.

It was precisely in that transit to Moscow when he landed in Fraga to shoot “Twenty Paces to Death” and “Karate, Fists and Beans”. 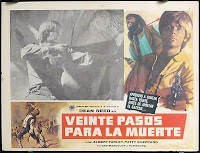 Diego Tejera, the main specialist of the film legacy in the Alto Aragonese town, was one of those children who went absorbed to the filming in which Dean Reed stood out.

“I was very young when the film was shot, but I remember it very well. I remember perfectly that most of the actors went to eat at the Hotel Sorolla or the Hotel Casanova, where there was also a cinema. The artists moved around there in complete tranquility. They came to film at the studios in Esplugas de Llobregat (Barcelona), where the town was represented, and to Fraga they came to film the exteriors. The young men, especially the children, liked to see them and go to watch the filming. For example, when filming on the Cinca River, which simulated the Rio Grande,” he recalls.

Tejera speaks with deep emotions for that happy time that has marked him so much. “I was 8 or 9 years old and I was very interested. I went on my bicycle to watch the filming. Sometimes, I even knew one of the actors personally, such as Fernando Sancho from Zaragoza - present in Hollywood classics such as “Lawrence of Arabia” or “King of Kings” - who was there every day. It was not a time to ask for autographs or take pictures, but just seeing them was all very exciting. I had some respect for them. It was a very special time. He saw extraordinary things. Sometimes they carried caravans. On other occasions they hired cattle”. he shares.

The town of Cardiel, 12 kilometers from Fraga towards Zaragoza, was a transcendental scene of Dean Reed's adventures in “Twenty Paces to Death”. ;In Cardiel the end of the film is staged, with a duel to the death in which Reed appears. Also near Fraga, in the Candasnos area, it was filmed at a ranch location. I also remember what was called 'The ravine of bullets', which was the road or road that is attached to the river and is now a landfill. The landscape has changed a lot in this half century", concludes Tejera.