We continue our search for filming locations for “Day of Anger”. After being told there are two deputies out in the street in front of the Talby’s saloon Scott goes out the back door and runs into Murph who’s been hired as a deputy. Murph tells Scott to be careful or he’ll be killed. Scott ignores him and goes around the side of the saloon and runs into Cross, now a deputy. He challenges Cross and when he draws another deputy in hiding opens up on Scott but he manages to shoot and kill them both. Talby comes out and asks Scott if everything is okay. Scott tells him there are no more deputies in town with a fast pistol. Talby tells him to come in a celebrate but Scott says no and walks away into the darkness. 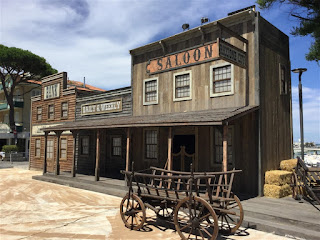 This scene was filmed on the Cinecitta western set in Rome and in the saloon.

For a more detailed view of this site and other Spaghetti Western locations please visit my friend Yoshi Yasuda’s location site: http://y-yasuda.net/film-location.htm and Captain Douglas Film Locations http://www.western-locations-spain.com/
Posted by Tom B. at 6:06 AM