Voices of the Spaghetti Western ~ “Taste of Vengeance” 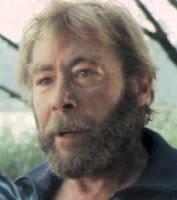 Klaus Kindler was born in Heidelberg, Germany on January 1, 1930, After attending an acting school in his hometown, Kindler made his 1950 debut as Georg in Götz von Berlichingen at the Wiesbaden State Theater. This was followed by appearances on the stages of Hamburg, Dortmund and from 1954 at the German Theater Göttingen under Heinz Hilpert. Initially cast as the young lover (Romeo, Leonce, Mortimer), and in later roles like Andres in Woyzeck were also were part of his repertoire.

From 1960 onwards, Klaus Kindler withdrew from the stage more and more. Modern theater did not meet his expectations, nor did German film at the time. He now focused almost exclusively on the dubbing of foreign films. Actors he often dubbed include Clint Eastwood (in For a Fistful of Dollars, For A Few Dollars More and all films from 1976 to Kindler's Death), Al Pacino (in Carlito's Way and The Scent of a Woman), Steve McQueen ( in The Great Escape and Papillon), George Segal (in Who is Afraid of Virginia Woolf?), Jean-Paul Belmondo (Adventure in Rio) and Alain Delon (in Le samouraï). In the first James Bond film Dr. No he spoke for Sean Connery, in the western series Big Valley lent both Lee Majors and - 25 years later - Richard Long his voice, in the western series The Virginian he was heard mainly as trampas (Doug McClure). In the Nikita television series, Kindler was the voice actor for Don Francks the first three seasons. Until 2005 you could still hear him in a radio commercial for Liebherr refrigerators. From 1985 to 1991 he also gave the character Gruffi his voice in the children’s series Disney's Gummy Bear gang.

In between, Kindler also occasionally took on roles on television. In the multi-part The Fifth Season, he was synchronized by his colleague Siegfried Rauch himself, because he mastered the required Tyrolean dialect better.

Klaus Kindler was married to actress Monika Dahlberg.  He died on April 16, 2001 in Pfaffenhofen an der Ilm, Bavaria, Germany.
Posted by Tom B. at 5:18 AM