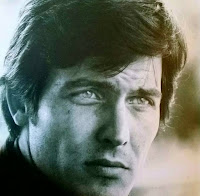 Italian film and fotoromanzi actor Paolo Giusti died in a Rome hospital after a long stay on June 24, 2020. He was 77. Born in Rome on October 21, 1942 he was known as a fotoromanzi actor and appeared in small roles in films. He was sometimes billed as Paul Just and was also a singer. Paolo appeared as Chris in the 1967 Euro-western “Death Rides Along” as was to appear in “The Last of the Gunfighters” a 1967 western that was never completed.
Posted by Tom B. at 7:07 AM