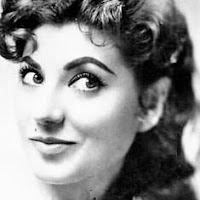 Spanish actress, vedette Mary Begoña passed away at the residence where she spent the last years of her life on April 12, 2020 in Madrid, Spain. Cause of death was not disclosed. She was 95 years old. With her real name Begoña Bragas born in Bilbao, Spain on April 4, 1925, the actress could have done little in show business. So she adopted Mary Begoña. According to printed bios she was born in 1929, which was quite improbable because in 1938, according to Álvaro Retana in his Historia del Arte Frívolo, he was already working on the premises of the CNT entertainment union, and was about fourteen years old. It has been learned that she was born in 1925. She spent he career on stage but made several films including her loan Euro-western “Torrejón City” (1962) playing a prostitute.
Posted by Tom B. at 5:23 PM