"After a meal, there's nothing like a good cigar" 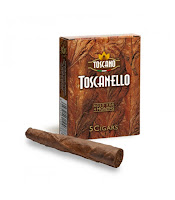 A fourth character, the cigar, was used extensively in “The Good, The Bad And The Ugly”. You see it in Tuco's pursuit of Blondie while trying to smoke his used cigars, two scenes of humanity: Blondie giving his cigar to Tuco after their stay at the mission and Blondie giving his to a dying soldier. It was also used as a lethal weapon to light a cannon and the dynamite on bridge. The cigar has been in all Leon's films but never more so than in The Good The Bad And The Ugly.