Franco Franchi and Ciccio Ingrassia: the record pair. The secret of their success [Part 1] 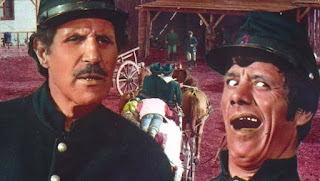 "There is more Italy in a film by Franchi and Ingrassia than in all Italian comedies"
(Federico Fellini, on Franco Franchi and Ciccio Ingrassia)

After their debut, as side numbers, in a musical film with Domenico Modugno and Mina ("Appuntamento a Ischia" by Mario Mattoli, 1960), the two comedians began to make themselves known to the general public, appearing in 10 films in 1961 and 1962, before the definitive consecration that took place in 1963. “Our films did not rest on a rigid screenplay, but on a simple canvas, a subject reduced to the minimum terms and everything there was to build was entrusted to the our ability to improvise and invent ... we were a guarantee for everyone because the film was good or bad: some grimaces, a little theatrical experience and knowledge of the tastes of the audience filled the gaps in the script ", Franco Franchi tells about the great success achieved in tandem with Ciccio. The two comedians were born in Palermo, respectively in 1928 (Benenato alias Franchi) and in 1923 (Ingrassia), and when Domenico Modugno noticed them in an occasional show, in which he too had participated, in Reggio Calabria in 1958, they were a couple fixed for four years. Together, Franchi & Ingrassia would have made up the greatest pair of Italian cinema, the pair par excellence of the Italian show, making all previous ones seem almost precarious. The director Luigi Comencini would have taken note of this triumphant symbiosis by calling them to embody the cat and the fox in his splendid and very successful "Pinocchio" television and successfully distributed for the big screen, in 1972. And one could not imagine a more successful assortment, with the small and elastic silver-colored Franchi engaged in perpetual motion, in contrast with the phlegm of the lanky, bloodless, cerebral Ingrassia. 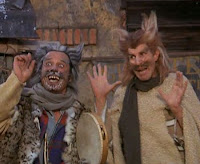 Of the two we can say that Francho is the arm and Ingrassia the mind, but in reality the two were complementary. At the cinema they specialized in the genre of parody films, a cue, a pretext, a hypothesis of ideas, and a willing directora (Simonelli and Fulci were the most assiduous) were enough to make a film with a flying drum, all the weight of which it was practically entrusted to the fantastic repertoire of the two Sicilians. Something similar had already happened, of course, with Totò in the post-war years; there too we have a product made quickly and almost with cynicism, which achieved great public success and the full, and unjust, indifference of critics. Franco and Ciccio are two comic masks that have their roots in the Sicilian cultural humus, imbued with parody and popular irony. The Sicilian parody is the revenge of the poor over the rich and powerful, a manifestation of celebration and happiness, a singular means of cultural expression. The parody is egalitarian, it wants to show that there are no differences between men, it exposes an easily understandable and immediately enjoyable comic speech. The two comedians are false cialtroni, fake boobs, capable of making fun of the powerful (who put the sedan) and the myths of cinema (who remake in parody), laughing at everything with simple and genuine humor. Franco and Ciccio are two clowns beloved by the public and despised by critics, perhaps precisely because their comedy is linked to a little understood genre such as parody. The Sicilian couple does not interpret parodies because they are in fashion or because they guarantee safe takings, but because it is their way of being actors, their comedy is formed on that type of popular culture. Italian cinema knows the parody thanks to Totò, Macario, Raimondo Vianello, Ugo Tognazzi and Walter Chiari, but the arrival on the big screen of Franco and Ciccio upsets the schemes and sets the parodic discourse in much more radical terms. Franco and Ciccio are the parody of cinema, two actors capable of making the public regress to the childish state of entertainment. The parody is their world, their primordial soup, the humus where they grow and are at ease, drawing on the Greek and Latin tradition, but more directly on the Sicilian ancestors. Their comedy is a parody that is based on a popular language, which communicates with the viewer through direct body language. Grotesque and irony are the style of their comedy, bringing down each model and transforming it into a parody. Their own figures are grotesque: tall and lanky Ciccio, small and with the rubber face Franco, full of expressive gestures that lead to fat laughter and unusual grimaces in high cinema. Their comic language is grotesque, because it is based on the misunderstanding, on the qui pro quo, on the crass ignorance exhibited by the comedian. Franco and Ciccio's masks are those of two characters inadequate to any situation who in life only want to try to get away with it in the best possible way, without understanding the reality that surrounds them.

The parody of the two comedians goes towards the people, it must be interpreted as a poor art that addresses the most humble and least cultured part of the public. The comedy of Franco and Ciccio derives from Plauto's comedy, from poetry and popular songs, from the carnescialate (carnival songs), from the work of the puppets (Sicilian puppets), from the placards and pasquinate (anecdotes of the people against power), from all the popular theater seasoned with farcical improvisation. Franco and Ciccio's poetics is the poetic of the cialtrone, because wearing two masks - which are two comic stereotypes - they behave like real cialtroni and show an upside down world. Franco and Ciccio are two actors who act arm in arm, starting from a preconceived canvas, but base their comedy on improvisation. They have great inventiveness, they pass the jokes, they respect the times without smudging, according to the lesson of silent cinema which included genuine, immediate, impromptu gags, based on face cakes and banana peels. They are actors but also authors of their films and of the television skits they interpret, because they read the script, try it, and finally improvise and enrich the script. The great success of Franco and Ciccio is due to the parody, but also to their way of being natural, genuine and popular comedians. Their mimic humor made of jokes, grimaces, verbal calembour, endless misunderstandings is perfect for an audience of few pretensions. Franco and Ciccio are the street theater that conquers cinema and television, two spontaneous comedians who send crowds of kids and older people into raptures, two fantastic actors who play cialtroni. "There is more Italy in a film by Franchi and Ingrassia than in all Italian comedies". This is because Franco and Ciccio described the people, the people of the squares, the people inadequate in front of the powerful, but who measure themselves against the powerful, the public therefore, was reflected in it and decreed its triumph. The Italian comic cinema of the 1960s is called Franchi & Ingrassia. The great success began at the end of 1962 with the film "I due della legione", the first real film by the couple's absolute protagonists; and above all with the following  "I due mafiosi" of 1963, which achieved exceptional success by collecting nearly a billion lire and from there a successful trend was inaugurated. In fact, later, they would come "Two Mafia in the Far West" (1964), the film by the couple who has made the most money ever, hitting one and a half billion in takings; "Two Mafiosi against Goldginger"  (1965) and  "Due mafiosi against Al Capone" (1966).