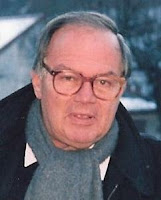 French director, screenwriter Étienne Périer, died on June 21, 2020 at the age of 88 in his home in Plan-de-la-Tour. Born in Brussels on December 11, 1931, Etienne Perier crossed the camera in hand last century, a script under his arm, from one end of the world to the other. He was an assistant to Henri Georges Clouzot in "Les Diaboliques", in 1957, and he worked on a film with his friend Bernard Buffet, a short film which won him an award at the Venice Festival in 1958. This success will propel him. He works with Jean Cocteau to write and prepare the "Testament of Orpheus". From then on, his career will never stop. A director, and scriptwriter, from I953 until 1958, he collaborated with Charles SPAAK on several scenarios including "Charmants boys" and with Dominique Fabre who, subsequently, wrote most of his French films. He was co-director and screenwriter on the 1984 TV Euro-western ‘Louisiana’ starring Margot Kidder.
Posted by Tom B. at 1:58 PM