Cops and Cowboys: Clint Eastwood at 90

A movie icon. He has become, perhaps alongside John Wayne, the most iconic of movie cowboys. That stoic scowl and intense whispered drawl. Clint Eastwood became the quiet, rugged and imposing tough guy, long before they spread into a vibrant action genre throughout the 70’s and 80’s (seeing the likes of Charles Bronson, and then Sylvester Stallone etc. follow in his wake). The era had moved from gangsters, to suave heroes, to huge epics before a rise in prominence with Westerns through the 50’s and early 60’s. Eastwood, something of a career journeyman to that point made the shift to Spaghetti Westerns, beginning a fruitful collaboration with Sergio Leone.

The thing is, the Spaghetti Western was looked down upon. It seemed to many a career death knell in waiting. They were cheaply made, lacking in Hollywood glamour, and stars tended to be on something of a wane (see Henry Fonda perhaps, or Lee Van Cleef). When Eastwood made his first film with Leone, A Fistful Of Dollars, his career was approaching a decade old. Some parts here and there in film weren’t star making, though Eastwood was part of a popular TV show (Rawhide). At this point in time, being a ‘TV’ actor meant you were more than likely to remain so. So as it was, Eastwood gambled on the Italian made Westerns. It would play on his established Western image from Rawhide and transfer it to the big screen.  By this time the Hollywood Western was at a turning point. They weren’t having the impact they previously did. Perhaps, ironically in part, to popular Cowboy themed TV shows proving popular, but likewise the landscape and tastes in Hollywood were changing. What were once big budget, grandiose, event movies, couldn’t be rationalised as economical. 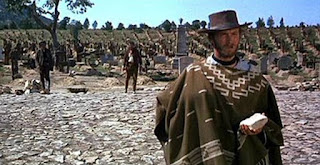 Of course it paid off. Eastwood proved a popular action hero. It brought to an end his time on Rawhide with two more in the ‘no name’ Trilogy still to come. For A Few Dollars More and his most iconic Western (whistle that tune now!) The Good, The Bad, and The Ugly firmly established Eastwood as one of the most popular action stars (in an era that also gave us Charles Bronson and Steve McQueen). He mixed up a string of Westerns in the next few years with a few War films, another genre Eastwood became adept in, his rugged persona suiting that of a soldier well.

However, it was in 1971, that another of Eastwood’s iconic films gave him another of his specialist hats. That, of the cop (he also had success playing a con in a few films too). Dirty Harry, pretty much every bit as iconic for Clint as his Cowboy work, started a long running franchise with his beleaguered, world weary and anti-authoritarian cop, Harry Callahan. The first film remains the best, which took the story of the Zodiac killer as inspiration and saw Eastwood tracking a cryptic serial killer. Bringing Eastwood’s persona into contemporary America made him a more direct working class hero. By this point, Eastwood was already 40, becoming a middle aged, slightly craggy hero, but no less imposing as he’d been in those Leone Westerns. His Sahara dry delivery and whispered growling have been spoofed mercilessly since, and some of his most iconic lines (particularly as Callahan) have also been quoted (or mis-quoted) countless times. 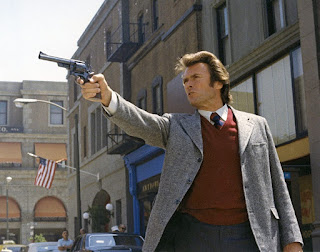 When it comes to nonchalant, stoic badassery, did anyone do it better than Eastwood in his prime? Callahan returns a further four times in a series of film that spanned 17 years. Initially the response to the sequels was lukewarm critically, but with the benefit of time, they’re all well made and enjoyable. It becomes, much like James Bond say, comfortingly familiar. Magnum Force was particularly strong as a follow up, but each film has some iconic moments, even if by the time The Dead Pool was rolling around, Eastwood was pushing close to 60.  There were other Westerns in the 70’s and 80’s, some more war films and some more cop films. There were also two films with an Orangutan that saw Eastwood as a prize fighting trucker and his furry friend on a couple of misadventures. I loved those particularly as a kid, and no disrespect to Clint, it was probably Clyde that fascinated me more. That being said, Eastwood as a stoic deliverer of dry humour is underrated for his comedic (straight man) qualities.

As the 90’s rolled in, Eastwood was becoming a little eclipsed as an action man by younger, beefier specimens. The in-thing seemed to be hugely muscular, physical titans. Ironically, many of those such as Arnold Schwarzenegger and Dolph Lundgren often list Eastwood as a direct influence on them. Critics began to make light of a man making action films as he approached his 60’s, but Eastwood, already well versed as a film director, would not only revisit a virtually dead genre, but he’d resurrect it, earn more critical credit than ever and firmly establish himself as a major cinematic visionary. He’d been largely known as a solid action film director to that point, but there was an extra layer of depth to Unforgiven that also used his age to add complexity and vulnerability to his character.

A modern masterpiece, a particularly craggy and weary old gunslinger takes on a last job to hunt down the perpetrators of a heinous crime, and runs afoul of a corrupt sheriff (played brilliantly by Gene Hackman). Not only would the film prove a huge box office hit, but it brought critical acclaim and four Oscars including a Best Picture and Director award for Eastwood himself. He’d also been nominated as Best Actor. The film beautifully bookended his cowboy career. A perfect way to finish. Eastwood’s ambitions increasingly began to lay behind camera. He still worked solidly for a time, but with a increasing irregularity. He also still made action pictures, often playing up on his age with notably enjoyable films like In The Line Of Fire and later, Gran Torino. Even more recently, The Mule brought Eastwood back in front of camera (whilst also directing), playing a 90 year old drug mule. Whilst it might not be action packed, it’s still enjoyable to see Eastwood playing a guy over his head in a life and death scenario. It’ll probably remain the one he bows out with as an actor, but it was a solid way to finish and no doubt, he’s got a few more directorial gigs on the horizon.
Still, in looking back over his peak period as an icon of Cowboy and Cop films, one thing is for certain; few do it better than Clint Eastwood.