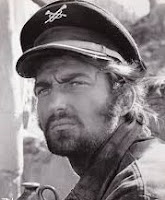 South African personality and actor Beau Brummell died in Pretoria, South Africa on May 11, 2020 according to a Facebook post by his daughter Cheyanne Bush. Born Michael F. Bush in Pretoria, South Africa in 1942, Brummell became better known for opening and operating South Africa’s first nudist colony ‘Beau Valley’ along with his wife Celia. Brummell wrote the story and starred in the 1970 Euro-western “Three Bullets for a Long Gun”. He was also a singer, musician who worked with the bands ‘Park Sable and the Jungle-n-Beats’ and ‘Beau Brummell & His Noble Men’ with which he had charted a 1963 hit called “I Know, Know, Know’.
Posted by Tom B. at 8:37 AM