Who Are Those Gals? ~ Ana Castor 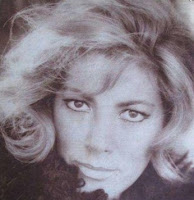 Ana Castor appeared in fourteen films from 1960 to 1968. She’s another of the mysterious actors and actresses who appeared in a number of films and then just disappeared from public view. I’d guess she was born in the late 1930s to maybe 1940. Her first film appearance was in 1960’s “Labios rojos” (Red Lips) (1960) directed by Jesús Franco in the role of Lola. Castor appeared in several more Franco films including; “La mano de un hombre muerto” (The Sadistic Baron Von Klaus) (1962) and her last Franco film “The Diabolical Dr. Z” (1966). Contrary to what you may hear or read she was not Franco’s fiancée or involved romantically with him during this time. Sometime during the mid-1960s she was married (?) to producer, production manager, assistant director José María Monis and the couple had a daughter named Gloria. In the late 1960s she married financier Alfonso González-Fierro y Viña and she had a daughter named Alexandra Fierro in 1968 who would go on to become an actress. Castor’s last film was as Sonia in 1968’s “Persecución hasta Valencia”.