Sergio Sollima was an Italian director and screenwriter, he was famous as one of the most important authors of the sub-genre of spaghetti westerns, but above all for giving life to the unforgettable "Sandokan".

Sergio Sollima, father of director Stefano Sollima, was born in Rome on April 1, 1921. He was one of the most famous Italian directors and screenwriters.

After obtaining his diploma at the Experimental Center of Cinema in Rome, Sergio Sollima works for a period as a film critic and a theatrical author.

In the 1950s he made his artistic entry into the world of cinema as an assistant to the director Domenico Paolella.

Sergio Sollima: the step towards the Italian western

In the 1960s Sergio Sollima became a friend of Sergio Leone who brought him to the sub-genre of spaghetti westerns, a genre that belongs to feature films shot in Italy and Spain, with reduced budgets and a poverty of means, according to the conventions of the first westerns. Despite the criticism, Spaghetti western are increasingly successful among the public and Sergio Sollima becomes one of its best known specialists.

He entered the genre as a screenwriter, but soon opted for directing. His films are known for the presence of the psychological construction of the characters and social issues.

Sergio Sollima for a period works under the pseudonym Simon Sterling with whom he writes a series of feature films inspired by the James Bond saga. These are films that narrate the adventures of Agent 3S3.

With the arrival of the Seventies Sollima devoted himself to the noir genre producing films such as "Città violenta" (1970), "Il diavolo nel cervello" (1972) and "Revolver" (1973).

The greatest success for Sollima comes after the production of television dramas inspired by the works of Emilio Salgari, the most important of all is "Sandokan" which becomes a real national case leading the director to make a climb between the idols of teenagers 'era.

After a career full of productions, Sergio Sollima died in Rome on July 1, 2015 at the age of 94. 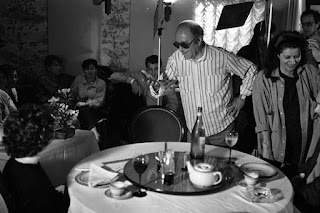