A troubled Texas Ranger who, having taken his revenge out on the "outlaw" who killed his Pa, discovers the truth about the father he loved. Now riddled with guilt, he has taken to drink and joined up as an unofficial sheriff with an unscrupulous rancher called Henry Brooks. But a small time farmer has moved onto the land adjacent to Brook's ranch - but he is not all he seems. 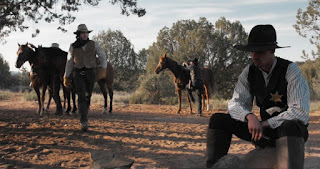