Because he knew how to ride a horse, American Robert Royal (Alabama, 1940) became a photojournalist in aftermath of Francoism and Spanish transition. Although this story does not start at a farm in south of United States, but in waiting room for an audition for actors in New York. A Royal, an aspiring interpreter, told him a guy who broke to talk that in Spain re was a lot of work for actors if y knew how to trot or gallop. The mine was in spaghetti-westerns that were shot in Almeria. Royal landed in Spain in 1963. "I liked country, although it was a politically suppressed society and, to a certain extent, mentally. As an American, I was interested in place y had written Hemingway and two Passos, also ir history... and knew language because I grew up in Miami, says at International Press Center (CIP), in Madrid, where it exhibits more than 40 photographs, in black and white and Color, until April 30th.

Royal not only rode in Almeria, but he also started to take camera. "I realized that selling out fashion and news reports gave me a privileged access to wonders of country." One day, at Madrid Film School, where he dropped, "someone from Ministry of Information appeared asking for a driver who knew English and Spanish to serve a U.S. producer, and it was me," he says. It began a stage of travel: Egypt, India... to shoot documentaries for American airline TWA. While working in Beirut, he was called CBS: "The dictator is dying." He asked: "Which one?", because re were a few on planet. "Go to Madrid, Franco is very sick." Royal remembers those days "of much coming and going in palace of Pardo". "I bought a van and put a bed in it so I could be re all time. Some nights came ultras to beat journalists, but it was clear that it was beginning of end of a society that could not follow more time in Spain or Europe, "he stresses. 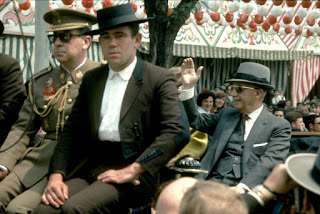 Royal began selling his photos to English and American media, Sunday times, Time or The New York times... "Living transition was like seeing a child born and growing up, I made many photos to Adolfo Suárez, who did not last as President of government but did a lot, and entered stage Santiago Carrillo, Manuel Fraga... As I came from being an actor, I saw m and everything seemed a great teat Ro, by way y spoke, ir gestures... ", he explains. "Till Philip Gonzalez came, quiet, handsome, young, and coils." For graphic correspondent, socialist former president is character that has influenced most in Society of Spain. While his "favorite historical moment" is photo of signing of Treaty of Accession of Spain to European Economic Community, on June 12, 1985, with González, n foreign minister, Fernando Morán, and Secretary of State for Relations with The European Communities, Manuel Marín.

They and or protagonists of transition are portrayed at Robert Royal exhibition. Spanish photographs. "Today's politicians are much more bored," he says. On walls of CIP also hang images of figures of culture as Eduardo Chillida, "who had a more interesting personality"; Joaquín Rodrigo, Andrés Segovia, Manuel Pertegaz, Ouka Leele...

Of his way of working, Royal claims that best reports were made when he formed a tandem with a journalist. "What one did, served to feed or. The writer put literary part and I was witness with camera of what was happening. "

Over years, "The history of Spain lost interest outside, country stabilized, re was confidence, money...". As his work for foreign media was not so succulent, Royal opened an advertising studio, although he continued to be a photojournalist. Today he estimates that his file contains about 15,000 negatives. With Spanish nationality, his gaze is no longer that of stranger surprised at a society he does not know. However, re is something that still does not like Spaniards, he points in jest: "His way of driving."

[The IMDb shows only two credits for Robert Royal. “Battle of the Bulge” (1965) and “Camino del Rocío” (1966) in the role of Robert Burton. We all know the IMDb is not the final word on films and credits. I have never heard of Royal and I have nothing on him in my database. All I can say is that if he was a competent horseman as stated in the article he was probably used as a rider in posses, gangs and as a double for actors.]
Posted by Tom B. at 5:53 AM