The film that made Clint Eastwood a star and legend has a cult, comic-book intensity 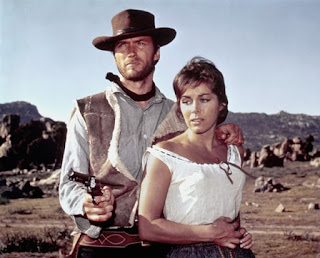 Two fistfuls in fact: two $500 payments – a gigantic amount – which the Man With No Name accepts casually from either side of a bloody feud in the sunbaked Mexican town of San Miguel. He has blown in like a strange force of nature, with a coolly amoral plan to use their mutual hate to his own gunslinging advantage. Striding towards a gunfight, he tells the coffin-maker in advance how many to knock up.

This is the 1964 movie, now on rerelease, which created the revolutionary new genre of the Spaghetti Western, an Italian coproduction shot in Spain and directed with inspirational pulp passion by Sergio Leone –drawing on Kurosawa. And it made a star and a legend of Clint Eastwood. He had been the impetuous young Rowdy Yates on TV’s Rawhide, an open-faced boy with a pleasant singing voice. In this movie, he suddenly, terrifyingly grew up: hat, poncho, grizzly growth of beard, short cigar, eyes perpetually screwed up, as if staring into the sun or suppressing a grimace of incredulous disgust. The Man With No Name and the brutal Dollars movies were a colossal rebuke to the blander Rawhide-style westerns that had come to dominate television.

The other figure that became a legend here was composer Ennio Morricone, for his extraordinary musical score – sometimes with plaintive and slightly nasal trumpets that declaimed his robust Aranjuez-type pastiche, and sometimes the main theme with its whip-poor-will whistling cries, whip-cracks, bells and eerie percussive shouts. The blaringly dubbed dialogue from bit-part players adds to the dreamlike quality of the film.

The Man With No Name (he acquires the name “Joe” from the locals, apparently an all-purpose term for gringos) arrives and instantly sizes up the way the local Rojo brothers are psychotically bullying a small child, who has been taken away from his mother, Marisol (Marianne Koch), because one of the brothers has conceived a fanatically possessive attachment to this woman. This is the hateful bandit Ramón (Gian Maria Volontè), who has a sensual face that often looms sweatily in Leone’s many melodramatic closeups – like a cross between Omar Sharif and Laurence Olivier.

His is the crew which has audaciously kidnapped and killed members of the US army and, disguised in their uniforms, tricked the Mexican army into handing over a huge amount in gold in return for a promised consignment of rifles. The deal ends in slaughter. Ranged against the Rojo gang are the Baxters – anglos who are every bit as violent, and also pompous and pusillanimous. Eastwood’s nameless avenger somehow manages to use one against the other, but shows a human side, of a sort, in his laconic friendship with the bar owner Silvanito (José Calvo) and his gallant rescue of Marisol.

Finally, he will materialise as if from a dust storm with what looks like a supernatural invulnerability to bullets, though keen to dispute Ramón’s belief that a Winchester repeating rifle will always be better than a .45 pistol. And he achieves that all-important ronin asceticism, a need only to keep moving on, although that thousand dollars has in fact made him very rich. A Fistful of Dollars has a cult, comic-book intensity. It is the punk rock of westerns.