Not only a boxing legend. Nino Benvenuti has entered the law in the history of Italian sport. The memory of everyone is April 17, 1967 when, on a warm spring night, eighteen million Italians, with their ears glued to the radio listening to the chronicle of Paul Valenti, suffering, crying and rejoicing with him for the conquest of the world middleweight title in New York, against Emile Griffith. A great undertaking, which has become the symbol of Italy that was growing around the economic boom, that of the sweet life of Fellini, the one that we all envied. But for Benvenuti champion – of over 200 boxing matches between amateur and professional, Olumpic gold and best boxer in the 1960 Olympics, five Italian titles and two Europeans among amateurs, a European title among professionals, two world titles in two different categories, super welterweight and middleweight - is opposed to the welcome man. A less known aspect that, on the occasion of his eighties, Nino wanted to tell in the first person, without using any parachute. He speaks of his family, an Istrian exile, and of the link with his never forgotten land; of the unhappy marriage with Giuliana with whom he had five children; of the great love for Nadia whom he married in 1998, almost thirty years after he met her; of the relationship he recovered with his daughter Nathalie. A river of words, sensations, feelings. A journey back in time, the photograph of a life lived to the fullest, where the man, beyond the extraordinary successes, turns out to be fragile and vulnerable. Where the comparison with everyday life, once the lights of the ring are turned off, it proves difficult. Where the errors, the disappointments mark him and brings him to rediscover the essence of life in a leprosarium in Madras, India. This, and much more, in this chat with friends, made up of memories, feelings and great spontaneity. 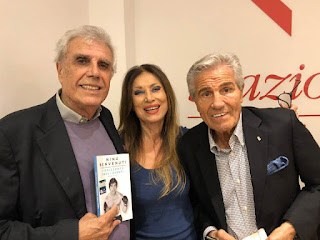