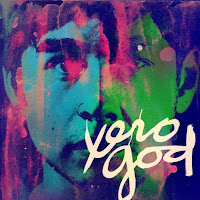 The first few seconds of Bandidos, the newest EP from Asheville hip-hop duo Xero God, are the aural equivalent of an old film projector sputtering to life. A rapid-fire sequence of distorted soundbites and bursts of static flickers through the speakers, as if the record itself is being brought into focus. The clatter soon resolves, and in an appropriately cinematic way: a sample of theater organ and a deep baritone proclaiming it’s time for the feature presentation.

“We think of each project like a different movie within the same world,” says Tyler Jackson, who raps under the name Musashi Xero. “For this album, we wanted to make a spaghetti Western.” Jackson and producer Paul Gaeta, aka Panther God, celebrate the upcoming release of their self-described space cowboy opera at One Stop on Saturday, Oct. 28.

Bandidos represents a chance for Xero God to make a less serious “movie” than its self-titled 2015 debut. While that album explores the dark character of an eponymous Christlike antihero, the new release showcases Jackson’s humorous side — more Blazing Saddles than The Matrix. “It started off as just a funny idea, like a joke, and we weren’t even sure if we were going to do it,” he says. “But as Panther God gave me beats and I started writing, we ended up deciding to double down and keep fleshing it out.”

Although their material may be less weighty than Xero God, the tracks on Bandidos are just as tightly crafted. Jackson packs each song with one clever line after another, many drawing on film references for their wordplay. On the EP’s title track, Jackson riffs off Star Wars as he raps, “Cinnamon girls, braids twisted, gold nose rings, sh*t / Sun rays hit ’em and I’m stuck like carbonite victims / Han Solo charmin’ like sheesh / Continental breakfast serving up quiche.” Bright, jazzy keyboards, layered with smooth saxophone and boom-bap drums underneath, complete the chill-yet-playful vibe.

Gaeta explains that his production on the record also takes advantage of cinematic touchstones. The samples of horses and six-shooters peppering the music are lifted out of old Clint Eastwood Westerns, while some of the dialogue samples are taken from the Western-inspired sci-fi anime Cowboy Bebop. Even David Lynch’s surreal thriller Mulholland Drive plays a part: “A cowboy who’s this really enigmatic villain pops up for a second in that movie, and most of that scene is put into little bits and bobs through the intro and last track,” says Gaeta.

If Gaeta and Jackson are the stars of Xero God, the guest artists they bring to the project are heavy-hitting character actors. Guitarist Jared Hooker, better known as Tin Foil Hat, and DJ Marley Carroll helped flesh out the record with atmospheric melodies and scratching work. “Having other players on the project helps give each album its own specific, sonically different feel,” says Jackson. “Their presence is superapparent — it wouldn’t be Bandidos without those two.”

A sense of teamwork also comes through in the lineup of the release show. Xero God is part of the BEAT LIFE collective, an Asheville-based network of musicians that supports more downtempo, hip-hop-inspired electronic music throughout the Southeast. The bill includes locals Koresma and Cpt. HyperDrive, as well as Lavier from Boone and Oak City Slums from Raleigh.

Gaeta, a lead organizer for BEAT LIFE, says the collective works both to promote its artists’ shows and make those performances themselves more memorable. “We’re all making essentially bass music, and it’s important for us to have a proper place to showcase those frequencies,” he says. “We bring in extra subwoofers, master engineers and lighting to have a more immersive environment.”

The upcoming show will be no exception, especially given its proximity to Halloween; Gaeta says visuals from The Undergrowth will accompany the music with special horror references for the season. But Jackson hopes the crowd itself provides some of the atmosphere. “If people want to come out and be dressed as cowboys, cowgirls and bank robbers, we’d more than support that,” he says with a laugh.
Posted by Tom B. at 5:52 AM