Let's Have a Big Bowl of Spaghetti Western Guitar 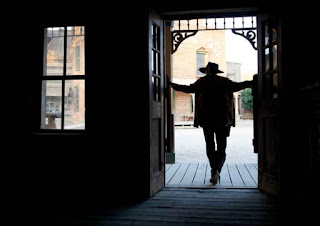 Remember Ennio Morricone's brilliant theme song from The Good, the Bad and the Ugly, the 1966 Sergio Leone film starring Clint Eastwood, Lee Van Cleef and Eli Wallach? If not, click here to jog your memory (or just watch the video at the very bottom of this story).

That song—including the iconic guitar figure that starts at :47—helped spawn an entire genre of music called spaghetti western (which also happens to be the name of the genre of films that inspired the music).

More of this music can be found on the soundtracks to other Leone films, including A Fistful of Dollars and For a Few Dollars More. And then there's the masterful theme song from Red Dead Redemption, which happens to be one hell of a video game—and let's not forget the Shadows' 1960 hit, "Apache," which pretty much started it all.

"While surf music gives you the feeling of riding the waves, spaghetti western music conjures images of riding tall in the saddle," says Ted James, owner of Deep Eddy Records in Austin, Texas, a label that specializes in surf, instrumental rock and garage. "Imagine a gunfight, a posse hot on the trail of an outlaw or even a lonely late-night ride through the desert—all while listening to spaghetti western music."

James adds that spaghetti western is technically a sub-genre of instrumental surf rock, and it might (or might not) include horns, Spanish guitar, unusual percussion and organ. I think you also could throw in a touch of dastardly, dark-sounding late-Sixties-style fuzz guitar.

But—to get the point already—spaghetti western guitar music is damn fun to play, not to mention easy on the ear, miles off the beaten path and charmingly weird.

Check out "Comanchero," a tune I wrote and recorded with my old band, Mister Neutron, in 2006. It combines a host of "spaghetti western" earmarks in its two minutes and 18 seconds. There's reverb-coated electric guitar (a 1966 Gretsch Tennessean), two acoustic guitars, one trumpet (overdubbed three times to sound like a crazy mariachi orchestra) plus a Vibraslap and bongos as bonus percussion. And let's not forget the bass and drums, which are working hard to sound like a stressed-out horse galloping through dusty ol' Mexico. Or even dusty New Mexico.

It didn't take that long to write—and it's pretty easy to play. If you write and record original music in the hopes that something will be picked up for use in a TV show or film, note that this song has been used in a few things (including a Swedish TV show), and I still receive the occasional check from BMI. As in, filmmakers often look for "Western movie"-type music.

By the way, I'm still waiting for Quentin Tarantino to ask me for a tune. My email address is below, Quentin!

Or completely ignore my advice and use spring reverb.

Attempt to keep the melody simple and let the track's atmosphere and underlying instrumentation do a lot of the talking. That said, there probably should be at least one solid "hook"—a figure that grabs you by the bullet-riddled poncho and draws you in. In the case of "Comanchero," it first appears at the :30 mark and reappears several times throughout the song. To aid the tune's fairly basic melody, I played the second "verse" an octave lower and added trumpet (not played by me).

There aren't too many spaghetti western guitar lessons on YouTube (See what I mean by "miles off the beaten path"?), but the clip below will get you started on the theme from "The Good, the Bad and the Ugly" (and there's even tab for the lesson, which you can access here).

If nothing else, I hope this inspires you to branch out and try something different, something miles off the beaten path. As long as you're playing guitar, you're on the right path, beaten or not.
Posted by Tom B. at 5:13 AM