Who Are Those Guys? Ron Carey 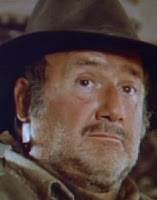 Carey was among the slate of actors who were members of Mel Brooks unofficial repertory company, appearing in several of the director's films; Carey was featured in “Silent Movie”, “High Anxiety”, and “History of the World: Part I”. He also appeared in “Fatso”, directed by Brooks' wife Anne Bancroft and featuring several Brooks regulars.

The son of Fanny and John Cicenia, he was raised in an Italian American Catholic family. Carey did stand-up comedy in the 1960s, after earning a bachelor's degree in communications from Seton Hall University in 1956. His comedy centered mostly on Catholicism and his childhood of being the undersized but quick-witted kid on the block. His break came in 1966 when he appeared on ‘The Merv Griffin Show’ and in 1967 he released a comedy album entitled The Slightly Irreverent Comedy of Ron Carey.

He also appeared in supporting roles in films and on television, and was seen in scores of commercials, including some T-shirt ads for Hanes, and an ad for Nabisco's snack cracker Better Cheddars where he sang. Because of his short stature he was perfect for the role of Joe Dalton in Terence Hill’s TV series and film as the leader of the ‘Daltons’. He later played Sheriff Fox in Terence Hill and Bud Spencer’s last western “Troublemakers”.

Carey died of a stroke at a Cedars-Sinai Medical Center in Los Angeles, California, on January 16, 2007. He was survived by his wife, Sharon, and his brother, James Cicenia.